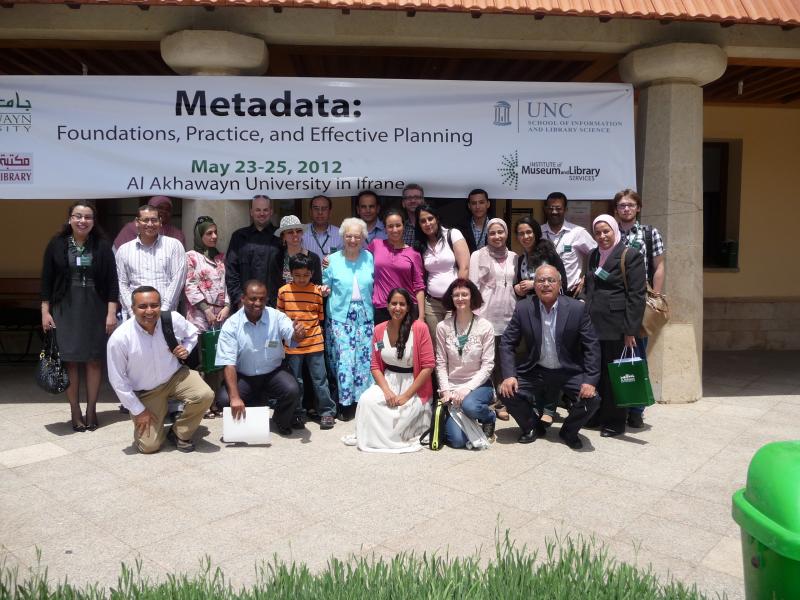 Last May, like a caravan headed east, several SILS graduate students and faculty members set off for Morocco with all their enthusiasm and expertise in tow. While their explicit purpose was to hold a workshop on metadata and knowledge management, their less tangible aim was to expand the dialogue between information professionals in the West and the Middle East. SILS faculty was represented by Dr. Javed Mostafa, Dr. Evelyn Daniel and Dr. Jane Greenberg, along with MSLS student Billy Cook and Ph.D. students Summaya Ahmed and Sarah Ramdeen.

Both Ahmed and Ramdeen are fellows of the ELIME-21 program, a joint venture between SILS and the Carolina Center for the Study of the Middle East and Muslim Civilizations. Led by principal investigator Dr. Barbara Moran, Louis Round Wilson Distinguished Professor at SILS, ELIME-21 stands for “Educating Librarians in the Middle East: Building Bridges for the 21st Century.”

According to co-principal investigator Mostafa, the program has two overarching goals. “The first goal of the program is to provide opportunities for graduate students, particularly for doctoral students, to get training in a Middle Eastern cultural context. We want them to have a chance to interact and learn in those countries. The topics of their experiences vary, from the digitization of scholarly Arabic materials to the organization, collecting, and cataloguing of materials at institutions across the Middle East.”

“The wider goal of ELIME is to promote and participate in the development of library and information science programs in the Middle East,” Mostafa continued. “We are now engaged in a discussion about developing an LIS certificate program in Morocco, with similar efforts underway in Egypt as well. We received significant investment from the Institute of Museum and Library Services that provided us with the impetus to explore these goals fully.”

Intercultural communication through library and information science is the mission of ELIME, and for the metadata workshop that took these members of the SILS community to Morocco. “We too often give lip service to cross-cultural communication, but until you’re involved in it you don’t really realize what differences there are,” said Daniel, who co-led the workshop with Greenberg. 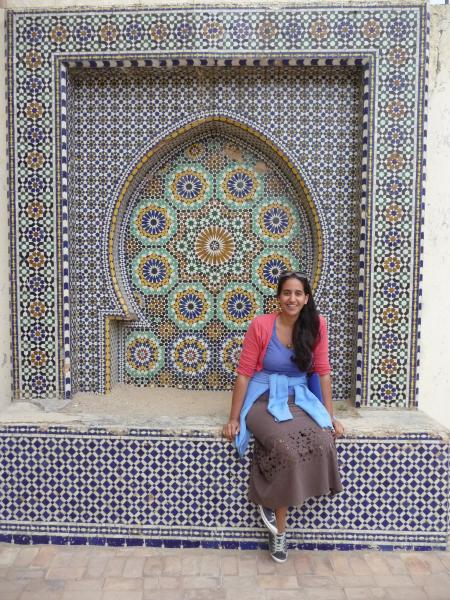 “The only thing for it is lots of exposure and experience between cultures.” The workshop took place on the campus of one of ELIME’s primary partners, Al-Akhawayn University (AUI) in Ifrane, Morocco. Though it may not fit with many westerners’ idea of Morocco, Ifrane is a European-style alpine town nestled in the Middle Atlas Mountains about 150 miles southeast of the nation’s capital, Rabat. “It’s actually a ski resort in the winter,” Cook said. AUI itself is a small – about 1,800 students – public university that was founded by royal decree in the 1990s. With its architecture in keeping with the alpine style of the town, Evelyn Daniel said, “It’s a beautiful campus, and the facilities were quite comfortable.”

Although coordinating the development of the metadata workshop presented something of a challenge – while Evelyn Daniel was at SILS, Jane Greenberg was in the middle of a semester teaching and conducting research in Spain they were able to put together a comprehensive, three-day program that focused on the rudiments and applications of metadata and knowledge management in a library setting. While Greenberg and Daniel developed the workshop’s content, the graduate students collaborated with the staff at AUI to make sure it went off without a hitch. It was not easy to work out logistics for registration, transportation and other details remotely.

“We were going overseas, and that meant making sure everything was in place before we left,” said Ramdeen. “Getting to work so closely with the staff at AUI was a great experience. I think it strengthened our relationship with AUI, and will help us in the future as we work on other projects.”

“Billy, Sarah and Summaya were critical [for the workshop],” said Mostafa. “Having them there really helped out because they did advanced work beforehand to get the workshop settled. I really want to give credit to them for helping execute the workshop.”

Students were introduced to the range of metadata standards and frameworks for their management, especially the Dublin Core standard with which Greenberg has been extensively involved in developing. Challenges to how organizations “do” metadata and its different forms – from the highly structured Dublin Core vocabulary to the looser, user-generated tagging systems we see on social Web sites like Flickr – was on the agenda. The group also focused on
emerging opportunities in the metadata field, including knowledge organization systems, the Semantic Web, and metadata for scientific data and the digital humanities, as well as management issues.

“In instructing,” Greenberg said, “we had to keep the varied backgrounds of our participants in mind.” Daniel explained that, while the participants were mostly library staff from the Mohammed VI Library at AUI, there was also a pair of librarians from the American University in Cairo, two from Russia and two from an academic libraries center in the Moroccan capital, Rabat. Unlike in the United States, library staff in Morocco often have little formal library training, an issue the ELIME program seeks to address. Many librarians there come from liberal arts backgrounds, as well as from the social sciences and information technology.

Even though there is little formal LIS training in Morocco, said Mostafa, there are common values that can be built upon. “It’s a culture that has a deep interest in scholarship, collections and the dissemination of knowledge,”Mostafa said. “They are quite ready to engage in advanced learning in LIS. At the workshop, I noticed how inquisitive and interested our colleagues were about developing LIS and learning more.”

Greenberg echoed Mostafa, saying, “There was a real thirst to learn. All the participants were so bright and engaged.” It must have been fairly well received, Greenberg thought, because at the end everyone was hugging. “That’s how you know it went well,” she said.

The metadata workshop was not the only project the ELIME group conducted over the summer at AUI. Cook, the student who also helped facilitate the workshop, received the Baker & Taylor Award to lead a project at the Mohammed VI Library. Staying after the metadata workshop team had departed, over the course of six weeks Cook created and implemented the AUI Digital Image Library. He conducted an environmental scan to develop a strategy for the project, generated
workflows for the various stakeholders involved and presented his strategy to the library’s administration. After conducting a pilot test, Cook implemented the digital image library using the Omeka platform, an open source Web publishing up nicely, the AUI Digital Image Library went live onCook’s last day in Ifrane.

Although the SILS delegation was clearly quite industrious during their time in Morocco, they did not spend all their time working. All took several opportunities to do some sightseeing and get a crash-course in Moroccan culture.

Music and food feature prominently in their reminiscences about Morocco, though there was one reported case of derring-do: “I defended my cabin and fellow passengers against ruffians during a train robbery between Marrakesh and Casablanca,” said Cook. 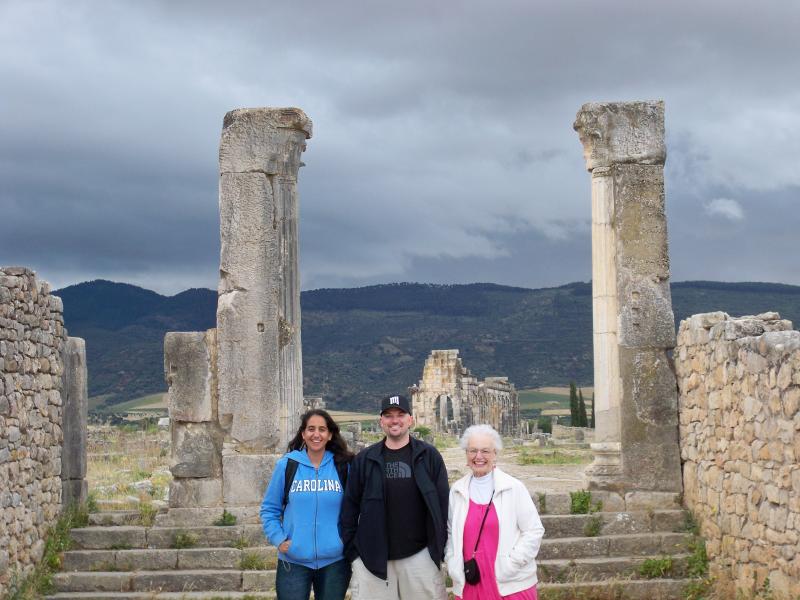 Other sightseeing experiences were considerably more low-key. In two separate groups, all made the trip to Volubilis, a partly-excavated Roman city dating from the 1st century CE that was built on top of a 3rd century BCE Phoenician settlement. “Having seen Pompeii,” said Daniel, “the Roman ruins were interesting in that you could see the similarities, even though they were so far away from each other.” Volubilis is known for its town houses that were built with large, intricate mosaics in the floor. “Morocco in general is striking because all of these old industries are still alive and being practiced – leather, tiles, mosaics, textiles,” Daniel continued. “And there’s a strong interest in these materials from the international community.”

“I think one of my favorite moments,” she continued, “was shopping in Fez with Evelyn, Jane, Billy and Javed and his son. The market was so colorful and so hectic. It felt like something out of a movie at times. Another favorite memory was a traditional festival they attended at the
public school in Ifrane, which serves students – many of them children of the staff at AUI – in the equivalent of kindergarten through high school. “There was dancing, there were instruments,” said Greenberg. Ever the inveterate librarian, Daniel was most excited to explore the school library. “It reminded you a bit of a school library here 20 years ago,” she said. “But the mix of books in different languages was remarkable. French is still quite common after the colonial period, and English is increasingly the language of the elite, but of course there were also books in Arabic and Berber.”

Interoperability – the ability for diverse systems and organizations to work together – is one of those ideas that crops up time and again in SILS courses. By fostering relationships and communication between information professionals in quite different parts of the world, it’s a kind of cultural interoperability that the ELIME program seeks to create. Beyond concepts, standards and best practices, it is the human urges to organize, share and help each other on which LIS professionals can build, making them ready intermediaries between the world’s diverse cultures.