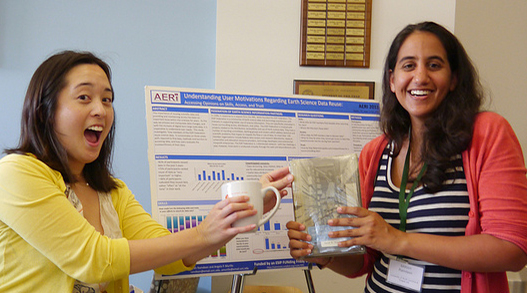 Angela Murillo and Sarah Ramdeen, both doctoral students at the School of Information and Library Science at the University of North Carolina at Chapel Hill, have won the best poster award at the 2013 Archival Education and Research Institute (AERI 2013) conference held June 17 -21 this year at the University of Texas at Austin.

The poster is titled, “Understanding User Motivations Regarding Earth Science Data Re-use: Assessing Opinions on Skills, Access and Trust,” and is based on their research study with the Earth Science Information Partnership (ESIP) members that addressed the following questions:

(1) What skills do ESIP members find valuable when searching for data?

(2) Where did they learn these skills?

(1) What steps do ESIP members take to discover data?

(2) What do they do when they cannot get access to data they need/encounter barriers during their searches?

(1) How do they determine quality and trustworthiness for a source providing data?

Data collected were analyzed using qualitative methods and statistical analysis. General findings included that 82 percent of participants re-used data in the past five years. Findings related to skills indicated that training courses were the least useful for learning skills and that knowledge of their field was the most useful skill to search for existing data sets. Participants also indicated that "on the job training" was the most important skill for finding, trusting, and re-using data. In relation to access, 97 percent of participants indicated that they had encountered a barrier to located data for re-use. The most frequent barrier was poor metadata or cost involved in accessing the data. Correspondingly, participants indicated that the quality of the metadata was the most important characteristic in determining confident of the data for re-use. They found the collections they were closest to (within their own organizations or workgroups) to be the most trustworthy, followed by personal contacts and governmental data sources. The majority of participants (82 percent) also indicated that they consider how others users might evaluate the trustworthiness of the data create.

This project was initially funded last year by an ESIP Funding Friday grant Murillo and Ramdeen were awarded at the 2012 ESIP summer meeting. The 2013 ESIP Summer meeting is being hosted next month in Chapel Hill and is sponsored by RENCI.

Murillo and Ramdeen received the only award presented at this year’s meeting. The prize included a mug and the book, The State Library and Archives of Texas: A History, 1835-1962, by David B. Gracy II.

Sarah Ramdeen accepts the poster award during the 2013 AERI conference in the above photo. Angela Murillo was absent from the photo due to illness.