Work, research and studying at the UNC School of Information and Library Science (SILS) means that we all spend most of our time parked in front of computers, the beautiful campus and spring weather tantalizing us from just beyond the window. But recently a sizable number of SILSters got out of Manning Hall and made the most of the beautiful weather by participating in the Tar Heel 10-Miler race, which was held on April 20.

Billed as North Carolina's premier running experience, the race begin at 7:30 a.m. at Kenan Memorial Stadium and wound a circuitous path through campus and the city of Chapel Hill before ending up back at Kenan, 10 miles later (see a map of the course here). The most difficult part of the course was the Laurel Hill Challenge, which pairs views of one of Chapel Hill's most beautiful neighborhoods with 1-mile, 200 vertical feet climb. It was "a doozy," in the words of Stephanie Peterson (former student services manager at SILS, now at the Kenan-Flagler Business School). 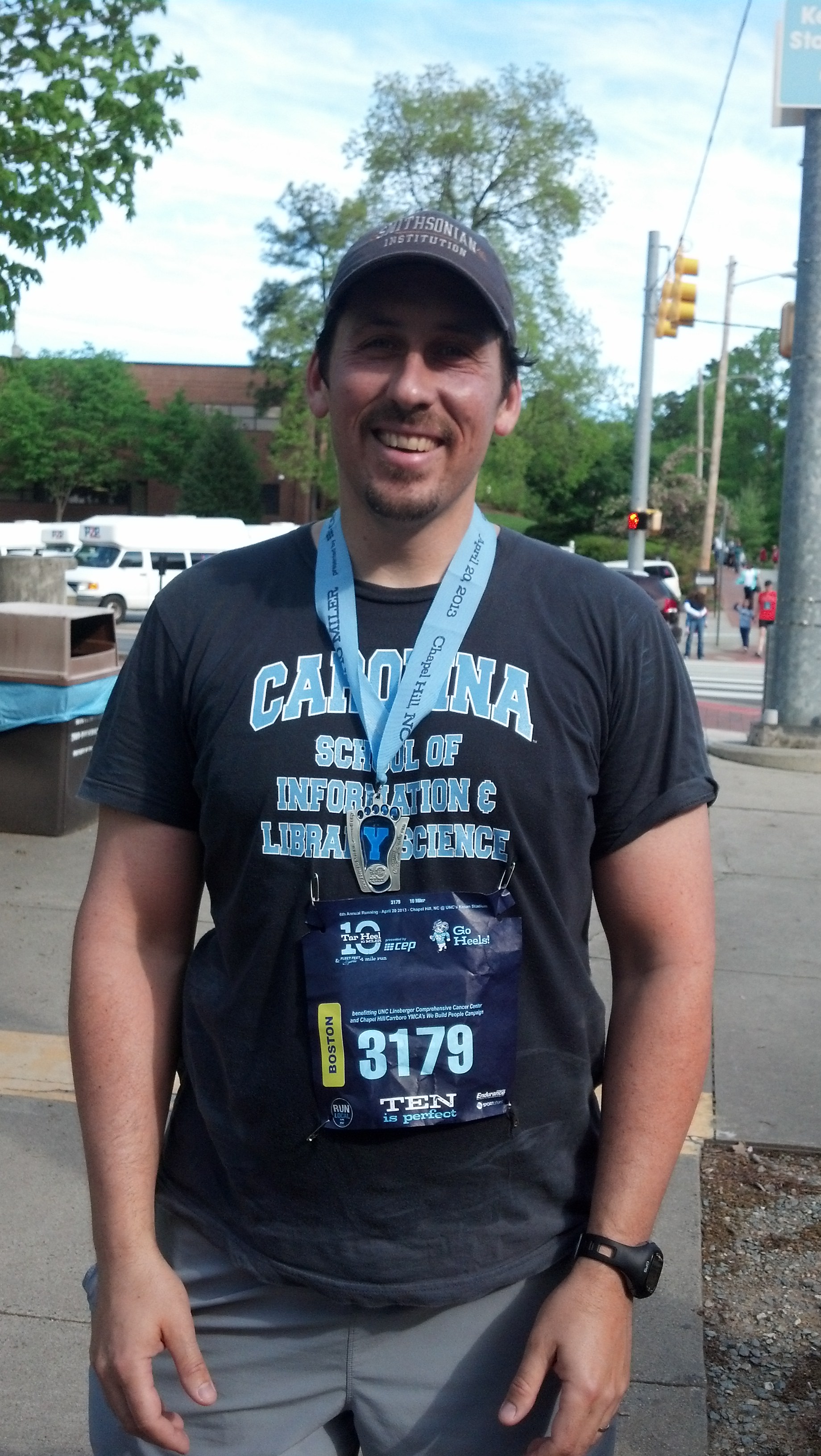 Several SILS students, faculty, staff and alumni participated in the event. Dr. Cal Lee, SILS associate professor, proudly represented the school, kitted out in a SILS shirt.
Two second-year Master's students, Ben Jahre (MSLS '13) and Jason Reed (MSLS '13) also participated - along with Jahre's wife, Jessica, and friend Katie Bush. Another group - Sarah Bankston (MSLS '12), Dani Brecher (MSLS '13), Matt Boote, and Tim Cook (MSLS '12) - participated together as well. Brecher noted that Anna Sandelli also ran with them, but didn't make it in the after race picture.
Ruth Finch (MSLS '10), an alumna who now works at the East Regional Library in Knightdale, also ran.
"I gained the "freshman 15" in the course of writing my Master's paper and looking for a job after graduation, and training for the race was a fun way to shed the extra weight," Finch said.
SILS undergraduate student services manager Kaitlyn Murphy ran alongside Peterson, her training partner. They stayed together for the entire 10 miles, and finished at 1 hour 41 minutes.
"That was actually four minutes faster than my goal time," said Peterson. "Luckily the temperature dropped to the 50s for the race so we really couldn't ask for much better running weather. Plus, starting and ending the race in Kenan Stadium was a treat."
Check out a gallery of race pictures submitted by SILSters at the school's Flickr site.
Kaitlyn Murphy with Stephanie Peterson 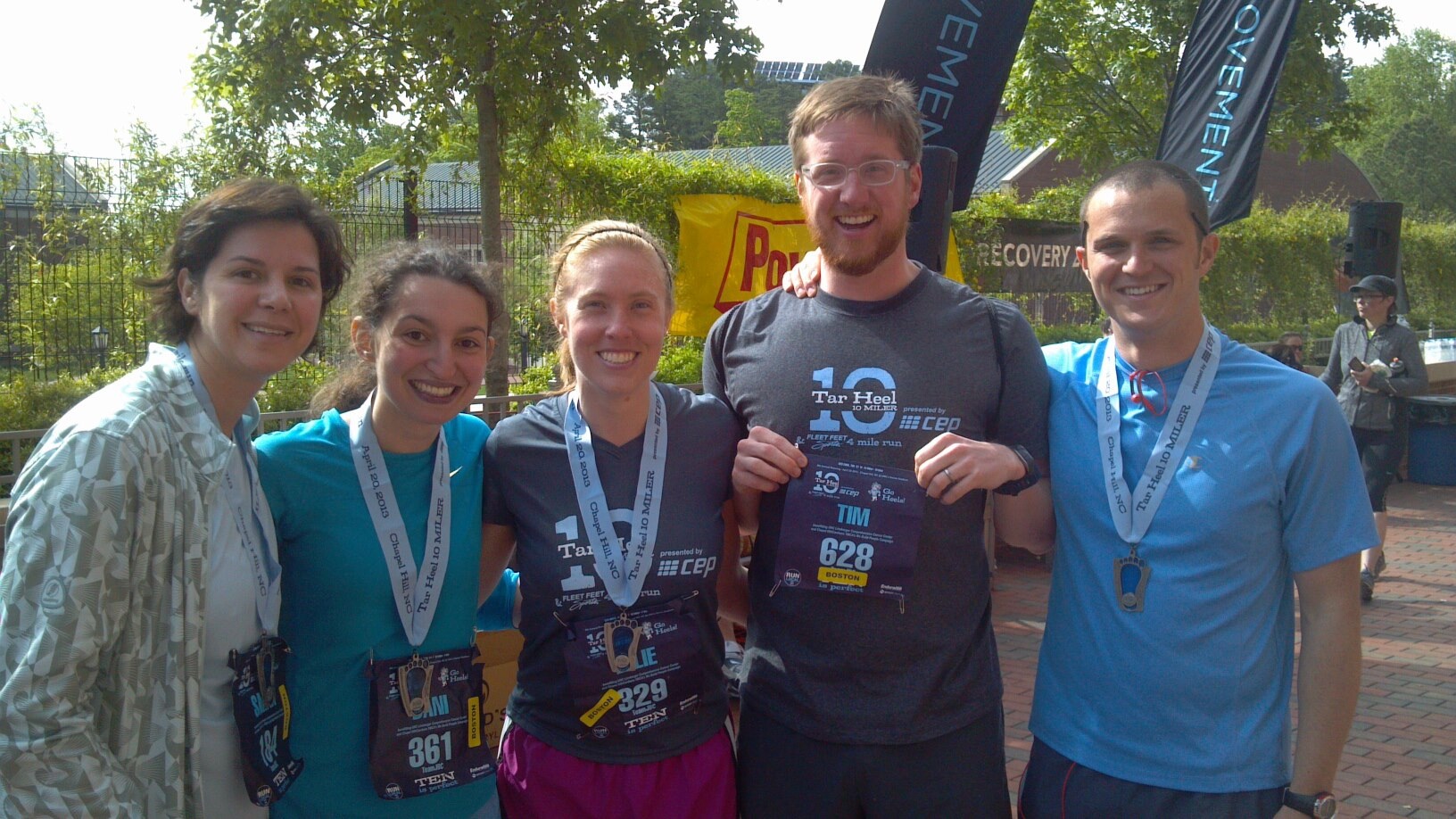 Sarah Bankston (MSLS '12), Dani Brecher (MSLS '13), Ellie Boote (MSLS '12),
Matt Boote, and Tim Cook (MSLS '12)
"The coursework I took and the faculty I worked with at SILS...provided multiple opportunities for me to be able to think about problems and issues from different angles."
-Leslie Sult (MSLS'02)