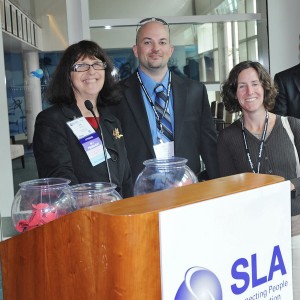 It’s no secret that University of North Carolina at Chapel Hill School of Information and Library Science (SILS) alumnus, Billy Cook (MSLS ’12), has been involved with the Special Library Association (SLA) since he began his Master’s program. Over the years, he has received several awards and most recently, he won the SLA’s “Best Contributed Paper of 2013” for his paper ”Peeking Over Cubicles: An Ethnographic Approach to Knowledge Management.” In addition to public recognition for his paper, Cook's fees will be paid for next year's annual conference.

Cook also achieved what his colleagues at the 2013 SLA Annual Conference in San Diego called “rock star status” for his recruitment efforts. The Leadership and Management Division Professional Development group of SLA announced him the winner of the “Get On the Beach” member recruitment contest. Cook recruited 10 new members to the organization. For his efforts, he received a $100 gift card and dinner with Deb Hunt, SLA president at the historic Del Coronado in San Diego.

“We are proud of what Billy has accomplished in a short period of time,” said Rebecca Vargha, head of the UNC Information & Library Science Library and former president of SLA. “Billy is the next generation of information professionals who will help move our profession and SLA forward.”

The photo is courtesy of SLA and was taken at the Info-Expo grand opening at the SLA Annual Conference. From left to right, Deb Hunt, SLA President; Billy Cook; and the runner-up in the Recruit-A-Member Campaign.