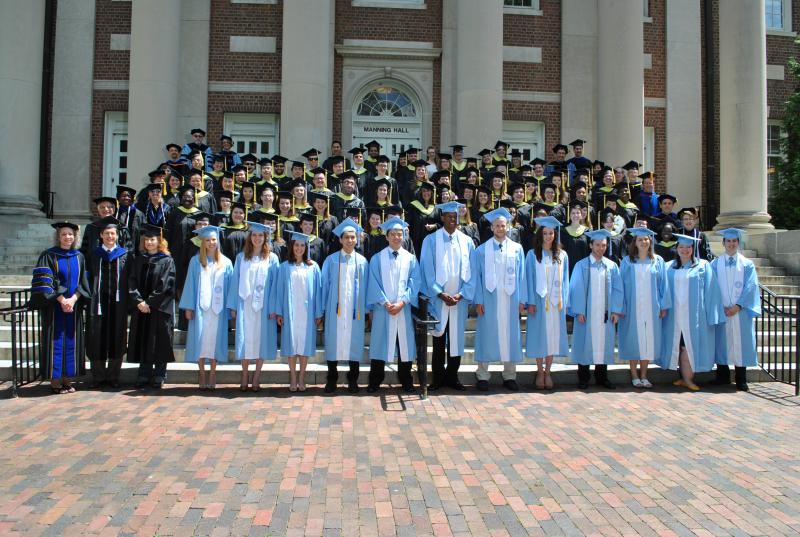 The School of Information and Library Science at the University of North Carolina at Chapel Hill celebrated the 2013 graduates on Sunday, May 12th during the commencement ceremony held in the Great Hall of the Frank Porter Graham Student Union.

Beginning with a class photo on the steps of Manning Hall, one of the largest graduating classes in recent SILS history and their faculty joined in a procession to the Great Hall for the ceremony.

Guests, faculty, students and staff were welcomed by undergraduate, Sean Gartland (BSIS '13). Gartland spoke about the education he received and noted that “it is truly the people that make 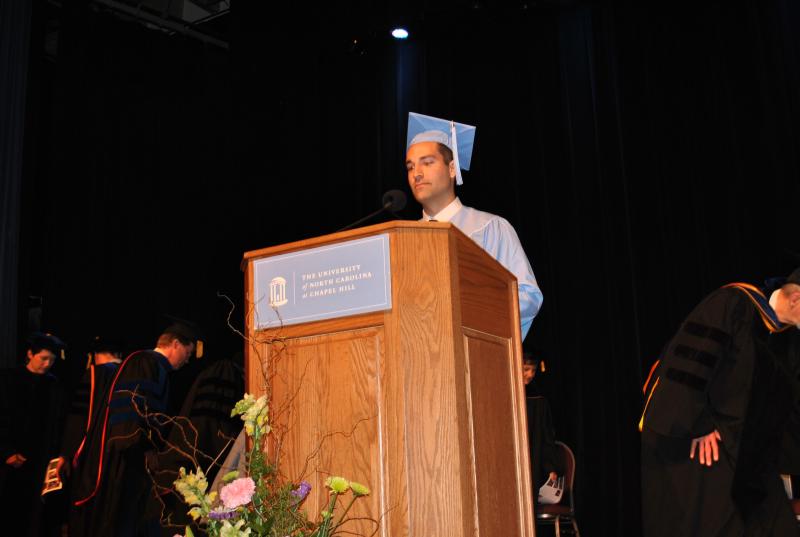 SILS. From our faculty to our staff to our peers, the relationships and the connections that I’ve made through SILS are what have propelled me to the next level academically, professionally and relationally,” said Gartland.

Dean Gary Marchionini welcomed the audience to Chapel Hill and wished all the mothers in the audience a happy Mother's Day.  He reminded the students that they are “now prepared to go into positions that could change the world.

“You’ve invested in your education and you can undoubtedly meet the challenges of the ever-changing fields of information and library science head-on,” he said. “The faculty and I are confident that the talents and skills you now possess will lead you to exciting and interesting careers.” 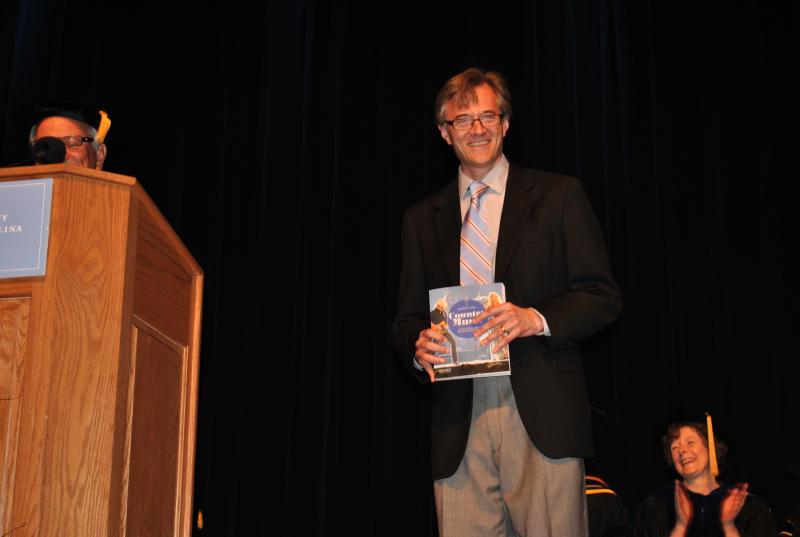 The commencement speaker was Michael Tiemann, vice president of Open Source Affairs at Red Hat. He discussed the ideas he had as a student to create the GNU C++ compiler and the work he put into it as well as innovative methods to help others recognize his vision. His talk was informative, inspirational and included humor and advice for the graduates.

Dean Marchionini presented Tiemann with the book, Country Music: A Cultural and Stylistic History, by Jocelyn Neal, a member of the Music faculty at UNC. He explained that Tiemann and his family have committed to the establishment and success of Miraverse Studio, at Manifold Recording, which is part of the local community. He also mentioned SILS' involvement in music librarianship, which is significant, both from the teaching and student perspective. 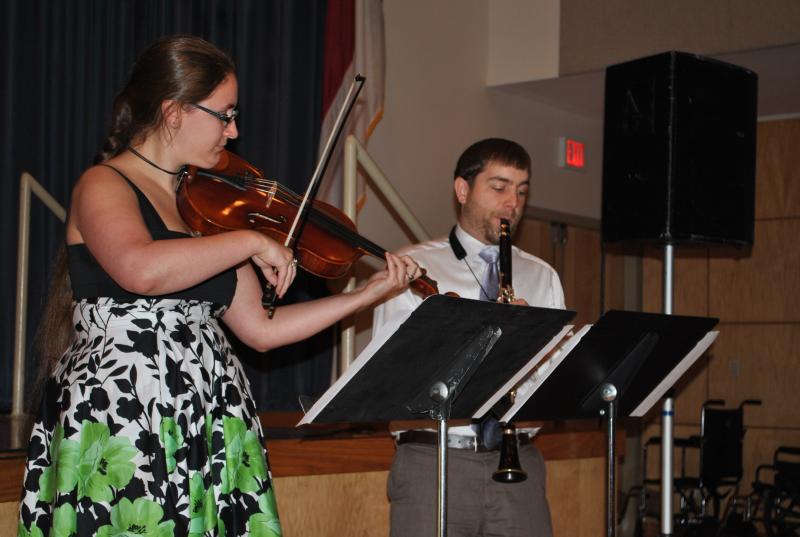 Dean Marchionini then introduced a musical performance by SILS graduate Veronica Koven-Matasy, on violin and graduate student Peter Shirts on clarinet, who provided a lovely performance of “Rondo from Duo No. 1.”

Several awards were presented to acknowledge the many achievements of students, faculty and alumni during the academic year.

Dr. Sandra Hughes-Hassell, SILS professor, acknowledged and thanked ten graduates who completed the Diversity Advocacy Certificate and commended them for their commitment to improving diversity at SILS. She noted that it was through their extraordinary efforts to improve the diversity climate that they received the Diversity Advocate Certificate Awards. The recipients included: 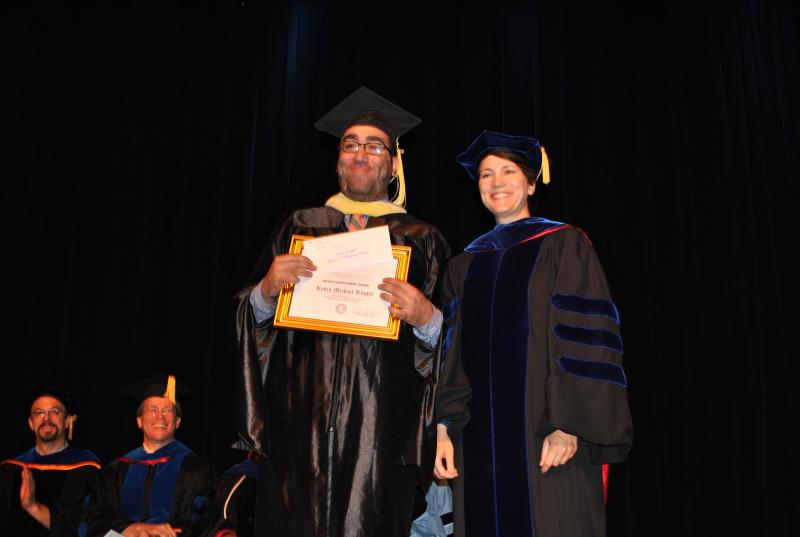 Dr. Diane Kelly, associate professor, presented the 2012 - 2013 Dean's Achievement Awards to Kevin Michael Klipfel for his paper “Authentic Engagement: Assessing the Effects of Authenticity on Student Engagement and Information Literacy in Academic Library Instruction.” The Selection Committee also chose Hilary Zelko for her paper, “Reasoning About Relevance.”  The Dean's Achievement Awards are presented to students who produce the highest quality masters' papers. Because the chair of the Committee, Dr. Brad Hemminger, was unavailable to present the awards, Dr. Kelly was honored to present to both students who she advised. 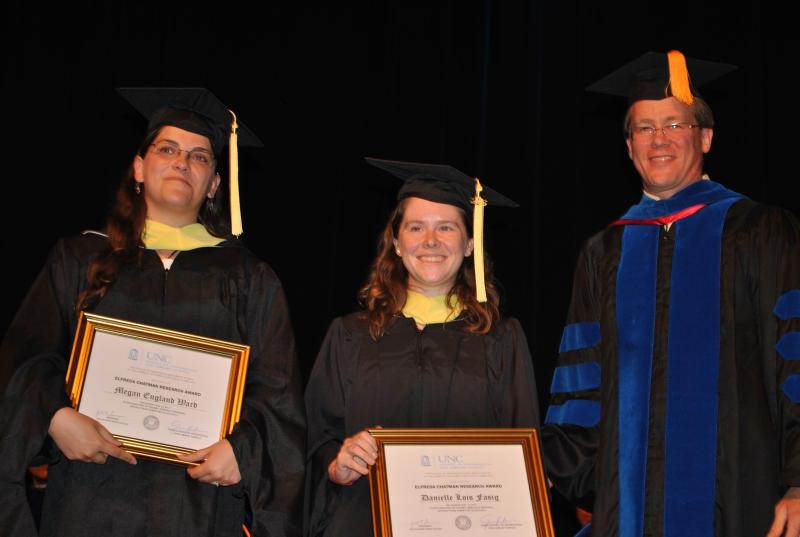 The Elfreda Chatman Research Awards were presented at the beginning of each semester to allow recipients to use the funds for their research. Dr. Brian Sturm, associate professor, presented the certificates and acknowledged the awards that went to Megan England Ward, for her proposal entitled “Just Say Hello: Proactive Courtesy as a Catalyst for Customer Loyalty in Public Libraries,” and to Danielle Lois Fasig, for her proposal entitled, “Usability Evaluation of Finding Aids for Archives.” The Elfreda Chatman Award was created by the SILS Alumni Association in 2002 to honor Dr. Elfreda Chatman's interest in original research. Chatman was a former member of the SILS faculty. 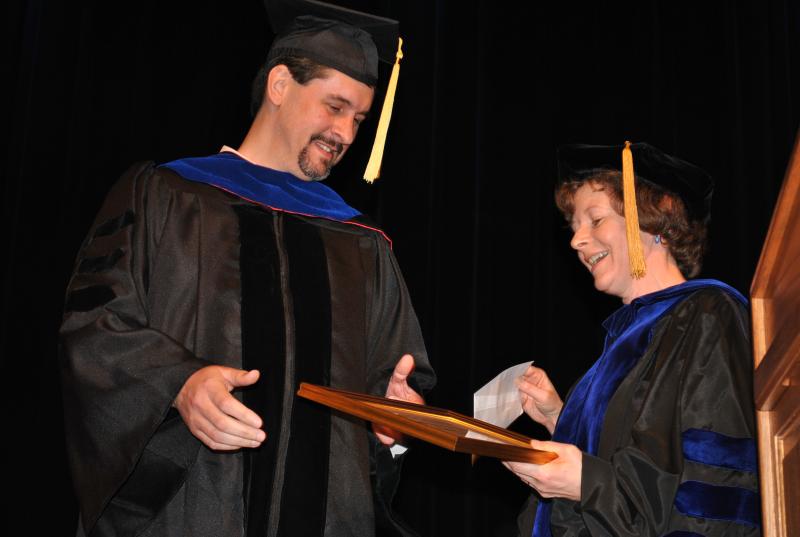 "The person selected for the award has been called an amazing teacher," said Haas. “His nominator said that his teaching is clear and easy to understand and he always gives helpful feedback on assignments. He is especially good at crafting exercises and assignments that challenge students while also guiding them to a good solution and he employs great methods to encourage class discussion and he listens to his students... and works with them to bring out their best.” 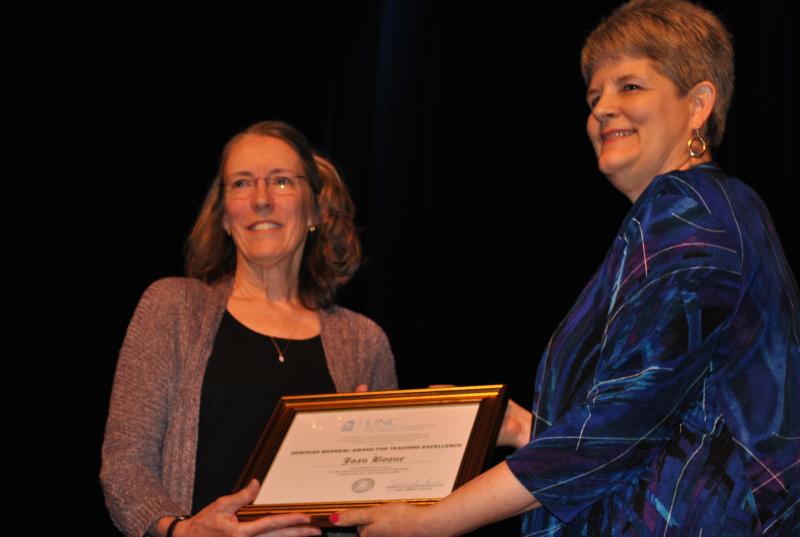 “Today’s recipient has an incredible ability to effectively teach the complex and sometimes intimidating subject of computer programming while making it fun and interesting to learn,” said Vargha. “She engages her students, resulting in a very interactive classroom. One of her nominators said, “I do not have a technical background, but through her assignments, and in particular through her ability to communicate in the classroom, I grasped enough of Java programming to start to see how a computer can become a tool for whatever work I would like it to do, rather than as an expensive gadget for the running of corporate workplace productivity software.” The student goes on to say that “she provided me with exactly what I needed to succeed and to figure out how to continue learning.”

"We hope you will find this membership useful and that you will engage in activities that benefit future students, yourselves and the School," said Sexton. "The membership is free for life and we would love to see you use it to stay connected to the SILS community."

She also presented additional awards supported by the Alumni Association: the Outstanding Service to the School Award and the Distinguished Alumnus Award. 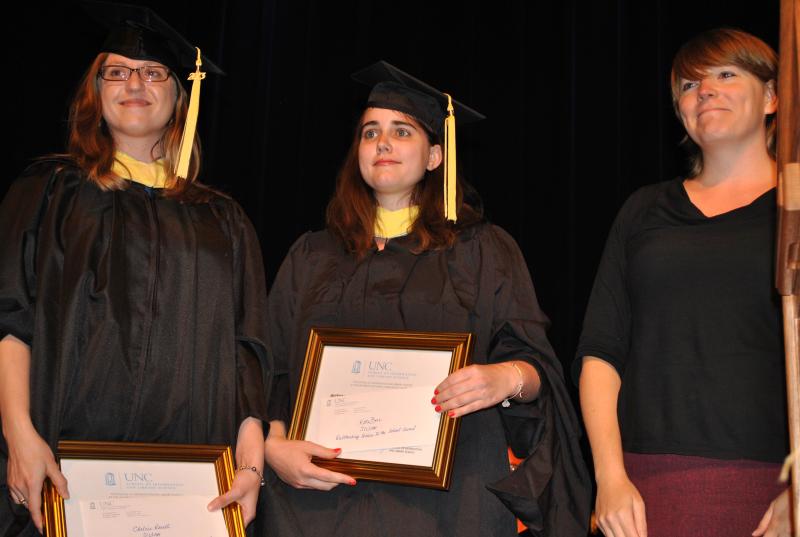 "This student represents SILS in a very important way by interacting with our local community,” said Sexton. “She is part of StorySquad, an initiative ‘designed as a community intervention to help young children gain pre-literacy skills, to help older children develop a concept of story structure and build visual literacy skills and imagination and to help older adults retain their mental agility and imagination and reflect on their lives from new perspectives.’ In addition she volunteers at the McDougald Terrace branch of the Durham County Libraries - Durham's first housing project and home to predominantly low income families. She helps with the after school science program at the library and she assists with the children’s homework questions. Kate Barr is not your average student, as a matter of fact you might say she is extraordinary and a 2013 recipient of the Outstanding Service to the School Award.

SILS Alumni Association awarded another student for the Outstanding Service to the School Award this year. “This student continuously goes over and above the call of duty, raising her hand to help whenever there is a need for the School,” said Sexton. “She has worked closely with the faculty who were preparing the School’s curriculum revision by gathering student opinions in surveys, organizing a series of student “fireside chats” to help the faculty get a better idea of student questions, interests and concerns. The curriculum changes were recently approved by the University’s Graduate School. This student contributed greatly to making that happen. Chelcie Rowell seems to always be there for any need the School may have and raises her hand to contribute however she may best serve. 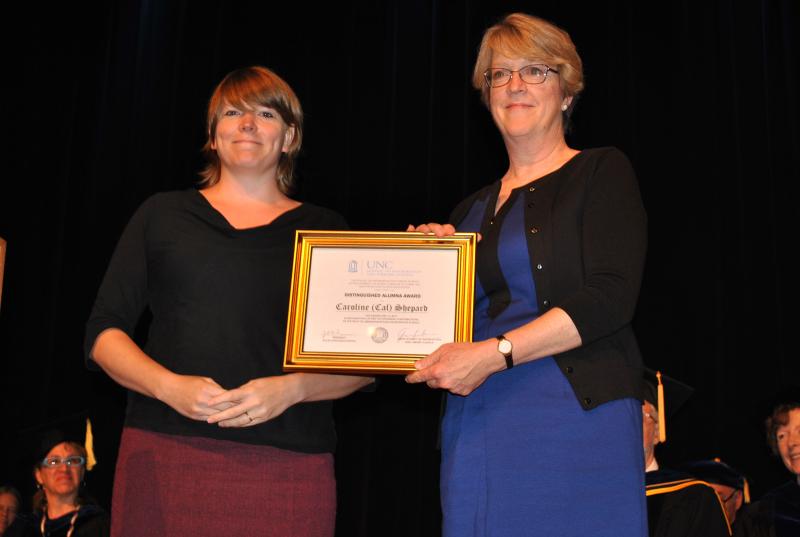 "Cal is the State Librarian of North Carolina who oversees a multitude of responsibilities," said Sexton. "She previously worked with SOLINET, the regional library consortium based in Atlanta, Georgia, as the organization’s educational services manager. She developed and implemented strategic and operational plans including marketing, service and project development, financial management, performance appraisal and salary administration. She created and managed training programs and presentations that were delivered to national and international audiences and established SOLINET’s first distance education program. She has contributed in many capacities in the world of library and information science, including providing facilitation for statewide initiatives for state libraries around the country and has been responsible for planning and presenting programs on library leadership and emerging issues such as technology and privacy – and working in public library children’s services and a myriad of other projects throughout her career… so far.”
Shepard thanked Sexton and the Alumni Association for honoring her with the award.

Kaitlyn Murphy, undergraduate student services manager, began the recognition of degree recipients by calling the names of those receiving the BSIS degrees. Lara Bailey followed by calling the names of all who were receiving graduate degrees, both MSIS and MSLS. The doctoral students were hooded by their faculty advisors. (The program for the day can be accessed here.)
Dean Marchionini closed out the ceremony by asking the students to turn their tassels. A reception was held immediately following the ceremony.

Photos prior to, during and after the ceremony may be downloaded from the SILS Flickr account at: http://www.flickr.com/photos/uncsils/

For those who were unable to attend the University's commencement ceremony held in Kenan Stadium, the video is available on YouTube at: http://www.youtube.com/watch?v=OMEbPd2lY_M