A TRIBUTE TO A GIFTED LIBRARIAN 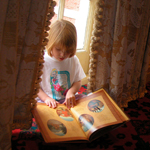 I grew up in Chapel Hill during a unique time when the University was the main employer and you knew your neighbors.  I became a Tar Heel, at age 6, and rooted for my beloved Atlantic Coast Conference basketball team. I knew from an early age that I would graduate from the University of North Carolina and have my diploma signed by our long time University President, Bill Friday, whom I had the great fortune to meet on several occasions.

I get emotional thinking of the lessons that I learned through a number of life experiences.  In a way, I became a “wise old soul” in a child’s body. I tried to pay attention to my dedicated teachers at Estes Hills Elementary School, and worked hard on my lessons.  In reflecting upon my childhood, my life was touched by many talented and educated individuals from around the country and the world. However, when I think of my creative abilities and my resilience, I think of Mrs. Eddy.

MEETING MRS. EDDY, A FACINATING PERSONALITY
At the time that I met the Estes Hills Elementary School librarian, Mrs. Eddy, I did not know that she was born in 1920.  I have since found out that she had numerous talents, beyond working in our school.  My purpose in this article is to encourage parents to get to know their kid’s school librarian as a stakeholder in their kid’s education. They have an important place, as Mrs. Eddy had in my own life.

To be honest, I was somewhat in awe of Mrs. Eddy. I was not intimidated, for she was very approachable. I was actually intrigued with her kindness and understated confidence. She, masterfully, maintained order among energetic school children, excited for a break away from classroom instruction. Mrs. Eddy’s impeccable dress, stylish white hair and accessories made a fashion statement and left me curious about her life. If one looked at Mrs. Eddy’s actions, they spoke louder than her words. Her actions and dedication made a difference.

Mrs. Eddy’s main goal was to be a key contributor to our love of learning. And she did this well.  Upon entering the library, we were organized into reading discussion groups. We were propelled into the world of imagination with her storytelling.

One day, Mrs. Eddy advised us of a new book arrival that had won the prestigious John Newbery Award, presented annually by the Association for Library Service to Children. Other books available to us had been awarded the distinguished Caldecott Medal. I was immediately drawn to the story Sam, Bangs & Moonshine by author Evaline Ness. I enjoyed the story so much, that I borrowed part of the title name for my new black and white cat “Moonshine,” who became a family fixture for 17 years.

So, Mrs. Eddy made an indirect contribution to my home life as I watched my fearless cat chase dogs twice her size, protect her kittens, survive a tornado and provide our family with endless entertainment.  Maybe the name “Moonshine” secretly gave our ferocious feline powers over our canine neighbors. And all because of a children’s book!

MRS EDDY’S LIBRARY: A PASSKEY TO OTHER WORLDS & LEARNING
Introducing us to traditional children’s books and award winning literature transported my classmates and me into marvelous adventures. I developed crucial skills through reading these books.  Skills that I used successfully in my career include: the ability to think creatively, to understand concepts in my mind in several dimensions, to achieve insights through other’s experiences and the ability to sit still and concentrate. Believe it or not, we had no cell phones, no Internet and no laptops. Just powerful imaginations.

So what did I learn? I can still connect with these lessons from other worlds. Upon reading animal books like The Call of the Wild, by Jack London, I connected with their plight, their challenges in the wild and the dignity of these creatures. The Black Beauty book series and movie still move me, thinking about this remarkable horse.

I also traveled on marvelous adventures between the time that school ended and dinner began. I entered the imaginary world of a space adventure when an astrophysicist disappeared in the novel A Wrinkle in Time, a science fiction fantasy written by American author Madeleine L’ Engle.  I also knew what it was like to hide out in the New York City Metropolitan Museum, as I embarked on an adventure with several kids in The Mixed Up Files of Mrs. Basil E. Frankweiler, an award-winning children’s tale by E. L. Konigsberg. And I could still make it home in time for dinner.

One afternoon, I read a book in the library on mosaic artwork. Immediately, I was inspired to create a majestic mythical peacock-like creature on a framed background. These days, I admire the artwork of others. However, in testimony to the inspiration of Mrs. Eddy’s choice of art selections, this gift that I created, at age 10, for my own mother is still in her home today. Mrs. Eddy, being the mother of two daughters herself, would appreciate that sentiment.

THE POWER OF BIOGRAPHIES & LESSONS OF RESILIENCY
The numerous biography selections, of famous people who overcame challenges, were of special significance to me.  In this world, I walked alongside individuals in their life stories, including athletes such as Willie Mays, Babe Didrikson and Jim Thorpe. I learned about the obstacles they faced and their physical and mental strength. These people inspired me, as I faced my own challenges in the years to come. Life’s lessons in the face of adversity.

LESSONS STEMMING FROM OUR SHARED LOSS
Mrs. Eddy introduced us to the world through books, and yet we knew little about her private life.  One day, however, Mrs. Harrison, my 5th grade teacher, made a sad announcement. Mrs. Eddy’s father had died. We were invited to share our condolences, as a class. I immediately began to write Mrs. Eddy a letter, expressing my sorrow for her loss. The death of her father hit me personally. I had just lost my Uncle Dan in a robbery in D.C., during his visit to a scientific conference a few months before. In my letter, I told Mrs. Eddy that I believed that my Uncle was in heaven and that I would see him again. I wanted her to believe that she would see her father again.

Letters from all classes, within our six grade levels, were gathered up and later presented to our grieving librarian. Shortly after returning from out of town, Mrs. Eddy saw me near my classroom. She paused for a minute and looked up at me slowly. I will never forget what she said next.  She thanked me for my letter and stated her appreciation for its message. I could tell that she instinctively knew that I understood her loss, because of my own pain. Even in her grief, Mrs. Eddy taught me, by her verbal and non-verbal response to my letter that I could make a difference, as a 5th grader. She also taught me that people appreciate others reaching out to them in times of pain. Lessons that have served me well into adulthood.

SKILLSETS DEVELOPED FROM EARLY CHILDHOOD READING
I received academic honors and recognition for achievement during my undergraduate years at UNC-Chapel Hill and in my Masters of Business Administration (MBA) graduate studies: the excitement of reading fueled by Mrs. Eddy’s own passion, contributed to my development of comprehension, analysis and creative thinking skills.

My academic accomplishments have led me to career project opportunities in research and writing, including a project in the Pentagon. And, of course, my empathy for others has allowed me to develop positive work relationships and great friendships along the way. Empathy for others enhanced through my interest in Mrs. Eddy’s carefully chosen biography section in my childhood library.

REFLECTING ON MRS EDDY & HER LIFETIME GIFTS
In the last few months I have heard stories of senior citizens learning to read for the first time.  These stories move me. To think of months and years of lost time in reading is an anathema to me.

I thought about my good fortune as a child to have a mother, father, grandmother and great aunt encourage my reading and schoolwork. And then I thought about Mrs. Eddy.  How lucky I was to have had a skilled educator to back up family encouragement of literacy with her own passion and reading suggestions.

So I decided to research for news on my former school librarian on the Internet recently, hoping to find out that she was still living and actively engaged in the Chapel Hill community.  I hoped against hope to visit with her and share her impact on my life. I pulled up the Carrboro Citizens obituary dated October 13, 2011.  I was heartbroken. Why had I not thought of contacting her earlier?  What an interesting conversation we would have had! Why was I not given a chance to learn about her life in person? I now, coincidently, live an hour and a half from Baltimore, where she was raised.

I had seen Mrs. Eddy, quite by chance, twice after completing 6th grade and moving from the area.  Once was in the Eastgate shopping center parking lot, after graduating from the University of North Carolina, where I spoke to her. The second time that I observed Mrs. Eddy was a few years later, while driving. There, to my great surprise, in Raleigh N.C. was my former elementary school librarian walking down a sidewalk along a hilly neighborhood side road. She exhibited a graceful and determined walking style with her stylish hair bobbing in the wind. This was the last time I that I saw her.  How I wish that I had stopped my car to greet Mrs. Eddy.  I regret not finding a way to change direction at the next stoplight and drive back up the hill. Another life lesson: take advantage of opportunities to speak to others at that moment.

As I reminisce on the character of this remarkable woman, I am on another journey in my life.  I am exploring a new career opportunity.  Anything worth doing involves risk and I have felt apprehensive at times during this transition.  As I revisit my special time at Estes Hills Elementary with Mrs. Eddy, I see myself as a young child pouring over those biographies of lessons learned from individuals, who refused to give up.  I can imagine Mrs. Eddy, just the way she was, when she encouraged, challenged and recognized me as a student, so long ago.  And maybe, just maybe, there is a special angel looking out for me, with white stylish hair, and a multi-colored scarf adorning her neck, pointing to biographies on the old wooden shelf.  Encouraging me to read, once again, about the challenges that courageous people faced and overcame.

If anyone ever writes my biography, Mrs. Eddy will most certainly be in it.  As a tribute to her, I plan to volunteer and work to be a force to overcome illiteracy on this planet and to pass on a passion for reading to ensure a legacy of this amazing librarian, who taught me life lessons that I still use today.