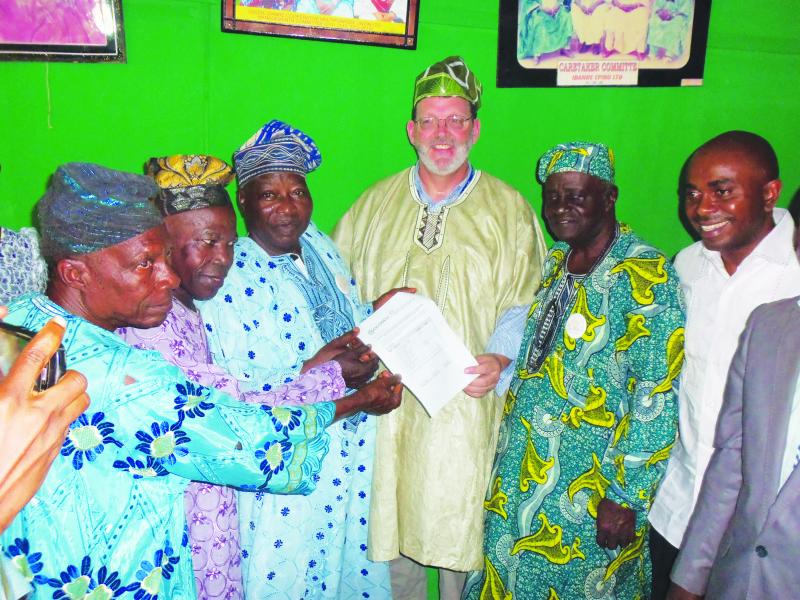 Currently, only one-third of the people on this planet have adequate access to the Internet. In many developing countries, universities may have an Internet connection, but not enough bandwidth to sufficiently serve its users. Only a small portion of students and professors worldwide have access to the Web and on-line educational resources. As a result, people in these underserved areas are excluded from methods of global communication and are at a significant disadvantage when seeking education.

Cliff Missen, clinical associate professor at the UNC School of Information and Library Science (SILS) aims to address these issues through WiderNet@UNC and its affiliated non-profit organization, the WiderNet Project.

The focus of WiderNet@UNC is the research and development of appropriate ways to deliver information to those left high and dry by the “digital divide.”

History
While teaching in Nigeria as a Fulbright Scholar in 1999, Missen experienced the frustrations of not having stable access to Internet at the University of Jos. When Missen returned to his job at the University of Iowa in 2000, he founded the WiderNet Project to provide training and develop low-cost uses of information technology in developing countries. 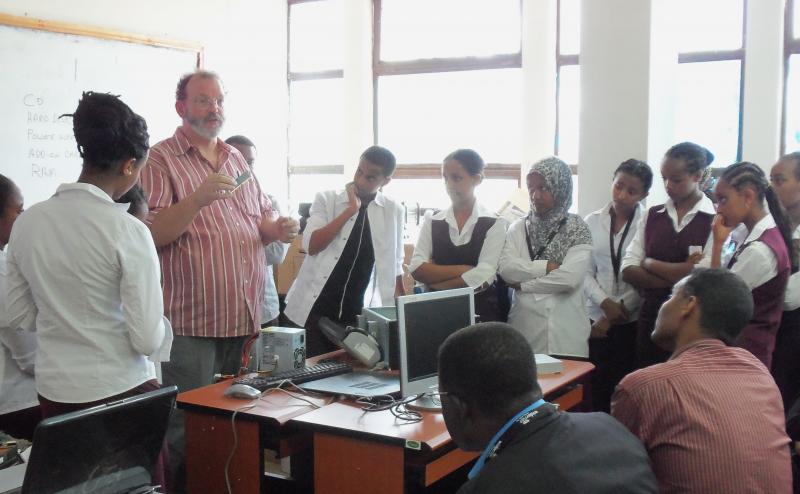 “With the help of hundreds of volunteers who have put in over 2000 hours, as well as donations from individuals and industry, we’ve made a lot of progress.” said Missen. “So far over 7,000 people in Africa, India and Bangladesh have attended our training programs.”

WiderNet has made information and education more accessible not only by donating resources – over 1,600 computers and 10,000 books so far – to universities in areas of need around the world,  and providing technical instruction, but also by providing access to the eGranary Digital Library. 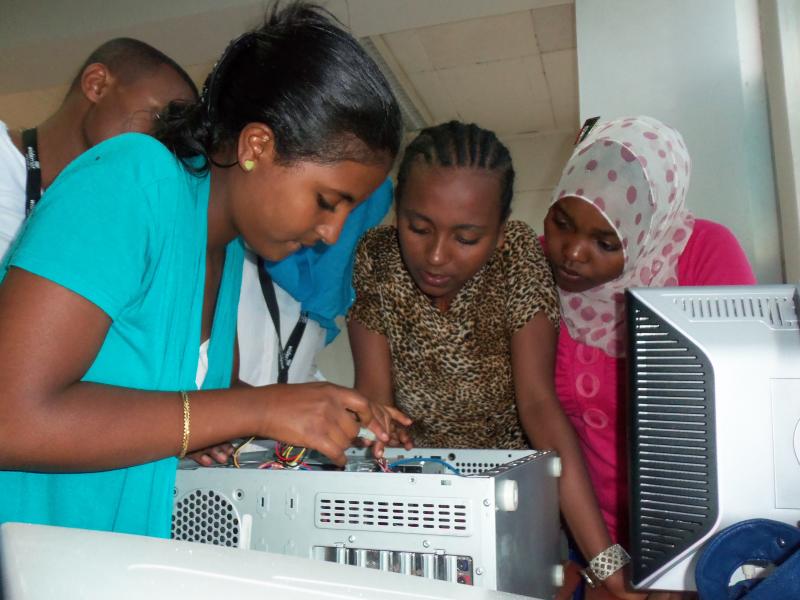 Through a process of garnering permissions, copying Web sites and delivering them to intranet Web servers inside partner institutions in developing countries and other places around the globe, eGranary and the Widernet Project deliver millions of multimedia documents that can be instantly accessed by patrons over their local area networks at no cost.

Missen created the first version of this offline library from Web sites sent to him on a CD-ROM. The sites were eventually placed on a hard drive and uploaded onto a server at partner institutions. The project was called the eGranary Digital Library because it “holds the seeds of knowledge just as an African granary holds the seeds of a future crop.”

This digital library contains over 30 million documents, each fully indexed and searchable using a built-in search engine. So far, eGranary is used by more than 2.5 million people and has been installed at over 700 institutions worldwide.

Recently, eGranary and the WiderNet Project have completed projects in Ethiopia and Zambia. 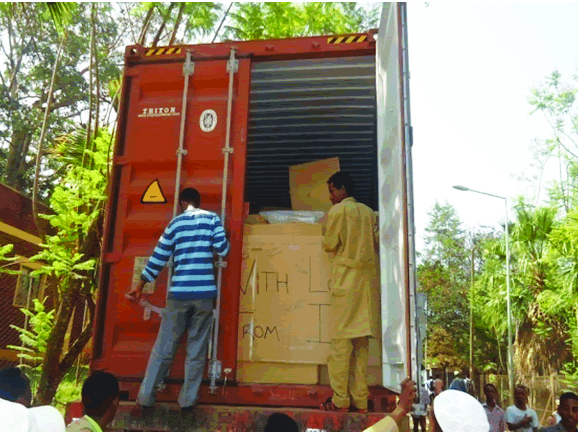 Missen’s most recent project has been a partnership developed between the WiderNet Project, the US Department of State—Ethiopia and Jimma University in Addis Ababa, Ethiopia. The WiderNet project’s initial intent was to install a local area network and hold a single training on developing curriculum from the eGranary Digital Library in December 2012.  Instead, the project expanded into much more.

Zambia
In October, the eGranary Digital Library was installed in all ten provinces of Zambia. The eGranary installation was made possible with support from the Flemish Association for Technical Cooperation and Development Assistance, which worked closely with Zambia’s education ministry. More facilities containing eGranary are planned to be installed in Zambia’s district resource centers and will be extended to school libraries and tertiary institutions.

Mary Maamba, chief librarian in Mongu, Zambia, hopes that the instillation of digital libraries will help increase the reading culture among members of the public.

Other WiderNet activities
The WiderNet Project is also in the process of developing an offline education information server designed specifically for the corrections environment titled, the Corrections Online Education Platform (COEP).

According to a report released by the Institute for Higher Education Policy (IHEP), “the sizeable incarcerated population consists of people in critical need of education to improve their post-release opportunities for employment and participation in civil society.” Research shows that recidivism rates are dramatically reduced, from greater than 60 percent to less than 15 percent in some cases, when inmates participate in a prison education program. 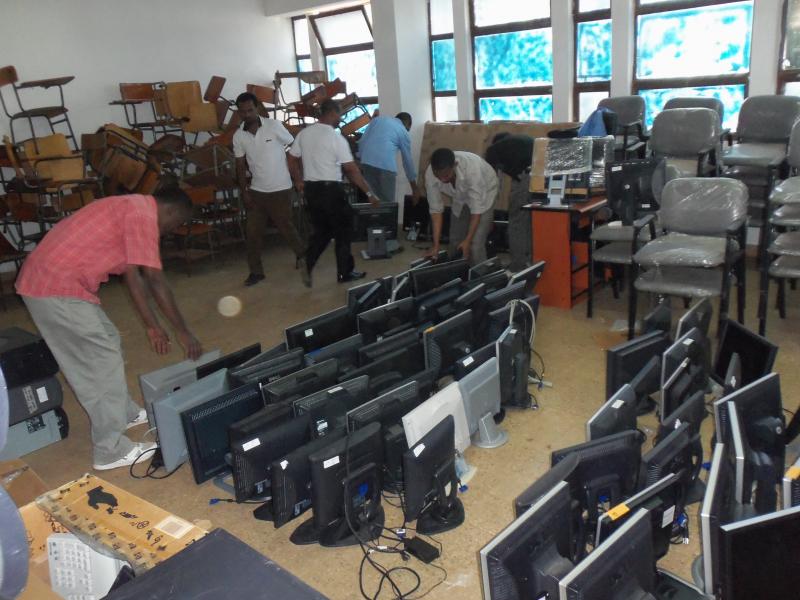 The goal of COEP is to develop an “innovative way to deliver information and an Internet-like experience to incarcerated populations. The focus of the collection will be resources for vocational training, GED and re-entry skills, especially in information technology and information literacy.”
The COEP is already undergoing demonstration in 11 prisons around the country and will be tested in the Los Angeles jail system this next year.

Missen has been working on establishing the two entities - WiderNet@UNC and the WiderNet Project  - in Chapel Hill since February.  Already ten current and former SILS students are working or volunteering with WiderNet.

“I want to give students the opportunity to get engaged in real-world problems and solutions,” said Missen.  “There’s a lot we can do to serve those who are, sadly sometimes literally, starving for information. I hope to take folks from UNC abroad and bring visitors to North Carolina as we expand our programs.  I want to extend our classrooms so we offer training to information professionals around the world and have them collaborating, in-person or over the Internet, with staff and students here.”

“WiderNet gives students the opportunity to gain hands-on experience in many areas, from librarianship to programming, without even having to leave Manning Hall,” said Kevin Fox, SILS graduate student. “As soon as I started working here [at Widernet], I began to recognize how concepts in my classes such as how to catalog information and even how to do a good search were being immediately applied to my work. I also enjoy working here because I know I’m helping provide information to people that wouldn’t have access to it without this project. It is a bit different working for a user base that is largely thousands of miles away, but more rewarding in many ways because you know the people there really need the information.”

Missen’s contributions to bettering the lives of those in need cannot be measured. Years from now, thousands will still feel the effects of the changes Missen have helped enact through eGranary and the WiderNet Project.