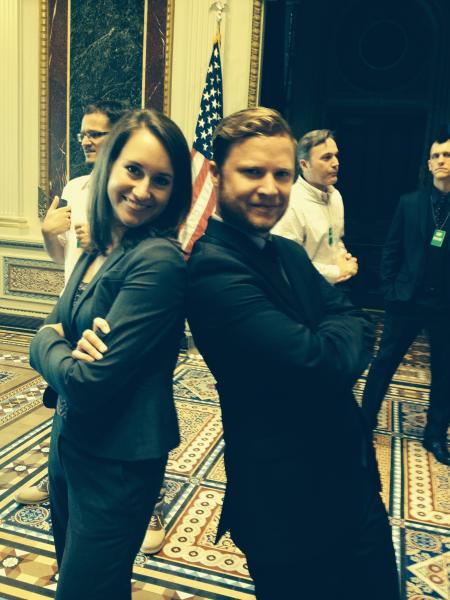 As students of all ages settle into another school year, education experts continue to seek ways to make learning more engaging. In one such effort, the White House issued a challenge to help students learn with technology through educational video games. During the weekend of September 6-8, over 100 developers from across the country participated in the White House’s first ever Education Game Jam. In a total of only 48 hours, developers were challenged to create and launch educational video game prototypes. Among the crowd at the event were UNC School of Information and Library Science (SILS) alumni Sara Trettin (MSLS ’13) and Hunter Janes (MSIS ’13).

Trettin, who recently began working with the Office of Educational Technology at the US Department of Education as a Presidential Management Fellow, was part of the event planning team.

“The purpose of the White House Education Game Jam was to encourage the exploration of creative game design ideas to help make challenging K-12 topics easier for kids to learn, and for teachers to teach,” Trettin said. “The event was full of energy; everyone involved was excited about what was happening that weekend.”

Janes participated in the game jam as part of TeamWolfshark from Red Storm Entertainment, a studio of multinational game developer Ubisoft. 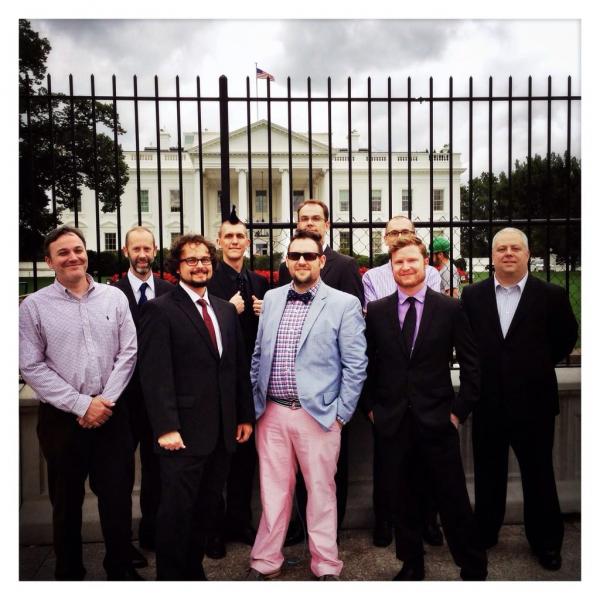 “We’re used to making games that have production timescales of months to years, so creating a game in under forty-eight hours was an exciting challenge for us,” he said.

Despite the time crunch, Janes and his team were able to successfully launch “Endemos,” a game intended to help students learn about ecosystems.

“Endemos allows a classroom to create unique animals, introduce them to a simulated island, and then observe how they interact,” Janes said. “Games use iterative fail states to teach players core concepts, and we wanted to bring a bit of that thinking into the classroom. Students were free to create whatever ecosystem they wanted, and were then able to quickly create an entirely new configuration of animals if their ecosystem collapsed.”

In addition to the teams of developers, students and educators were also invited to the event to aid in the creation of ideas that would be most beneficial to student education. Students and education experts, such as US Chief Technology Officer Megan Smith, were also invited to play the games each team created. Trettin feels that the interaction between developers and education professionals helped enhance the quality of the prototypes developed.

“We had several expert educators at the event who embedded themselves with the developer teams and shared their classroom experiences which really helped the teams shape their game designs,” Trettin said. “Also, once teams had a somewhat playable prototype, students from the Artlab+ program came in and play tested the games to help developers further refine their games. The students had great feedback about the games.”

After successfully producing a prototype, teams showcased their finished products in a final presentation. As a required component of the presentation, each team created a trailer to explain and demonstrate their games. According to Janes, producing this trailer posed its own unique challenges.

“The video production side of the team got practically zero sleep the night before the presentation,” Janes said. “They had to improvise due to working in a hotel room, so they did things like recording the voice-over with pillows and a milk jug. We couldn’t be prouder of what they were able to put together.”

Despite all the obstacles that arose from such limited time and resources, Janes and his team were able to create a game that was well-received by students and education professionals alike.

“We had to make some really hard choices and cuts as the jam went on. It’s never easy to excise sections of a game that you’re excited about, but I think the game is actually stronger due to the time crunch we were under,” Janes said. “Endemos ended up being a concise aesthetic statement, and a really focused educational tool.”

Although the game jam was only a weekend event, Trettin anticipates seeing some of the prototypes turned into fully playable games. She also looks forward to the potential for more regional game jams across the United States in the coming year, providing many more developers the opportunity to become involved in this important and rapidly-growing field.

“I hope more SILS graduates think about getting into game development and education,” Janes said. “From an information/data science perspective, there’s a lot of really exciting work being done in those fields. The SILS community should also feel free to contact me if they have any specific questions about working in game development—my digital door is always open.”

Janes can be reached by email at hunter.h.janes@gmail.com or via Twitter at @hhjanes.

View trailers from all teams.