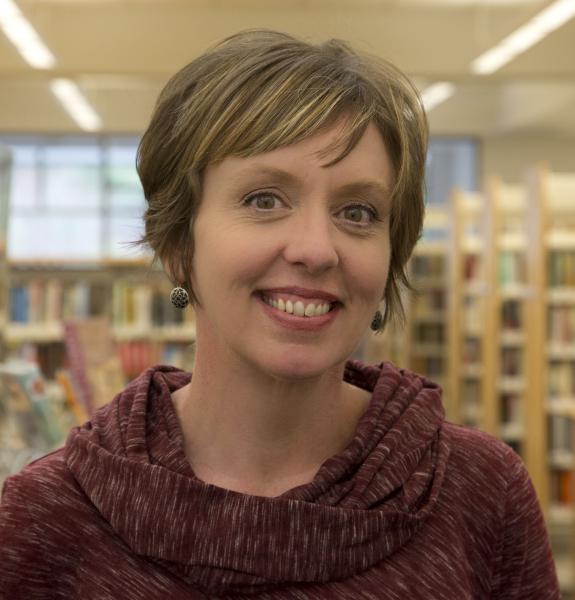 Susan Brown (MSLS ’01), director of Chapel Hill Public Library, has been named a 2014 School of Information and Library Science (SILS) Distinguished Alumna. The Distinguished Alumni Award will be presented to Brown during the School’s commencement ceremony on December 14.
The award is presented by the SILS Alumni Association to those who demonstrate a high degree of professionalism and outstanding service to the profession and to the School of Information and Library Science. Those selected exhibit a strong commitment to librarianship or information science and they are selected for the outstanding professional library or information science achievements at national, state or local levels.
“I feel incredibly honored by this award,” Brown said, “When I look back on previous recipients, I am so proud to be placed in such company.  As I continue to lead Chapel Hill Public Library into the future, I hope to continue to live up to this great honor.”
Brown began her appointment as director of Chapel Hill Public Library in May 2013. Prior to beginning this appointment, Brown served as Marketing Director for Lawrence Public Library (LPL) in Lawrence, Kansas. In this position, she led the “Banned Books Trading Card Project,” an initiative that took place during Banned Books Week 2012 and invited local artists to create trading cards inspired by a banned book or author. The purpose of the project was to renew appreciation for challenged works of literature and draw attention to the harms of censorship. The project was covered by several media outlets including The Seattle Post, The Chicago Tribune, and The Huffington Post. For leading this project, Brown was honored with the 2013 John Cotton Dana Library Public Relations Award, the most prestigious award of the American Library Association. The project continues annually during Banned Books Week at Chapel Hill Public Library.
“While at LPL, in addition to the Banned Books Trading Card project, I lead a re-branding project and a website redesign, developed a strong social media team and presence, and helped position the library as a vibrant and relevant community anchor,” Brown said. “I still feel deeply connected to that library and it remains an influence on me and my work here in Chapel Hill.”
After completing her time at SILS in 2001, Brown was hired by Cameron Village Public Library in Wake County, where she feels she discovered her passion for public libraries. She thanks this job and her time at SILS for preparing her for a fulfilling career.
“My time at SILS gave me a great foundation to go on to a successful career,” she said. “I had worked in libraries for a few years before coming to SILS and I must say that I approached graduate school feeling like I didn’t have much to learn – I was just there to get that piece of paper.  Of course, I had lots to learn, and SILS helped me learn it.  I was fortunate to study with David Carr and his approach to libraries and communities continues to be an influence on my professional endeavors.
“Since graduating, SILS has been very useful, especially in regard to professional networking.  A degree from SILS is an instant connection – at a conference, in an interview, or on the job. I think that along with the SILS degree comes an expectation of leadership and innovation that has been expected of me, and I expect it of SILS alums that I work with or hire.”
"SILS coursework gave me a great foundation of theory needed to think in an informed and critical way about how humans and information systems interact."
-Page Laubheimer (MSLS'12)