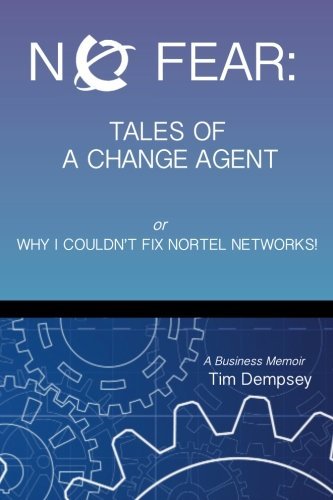 UNC School of Information and Library Science (SILS) alumnus Tim Dempsey (MSLS ’80) has just released a new book titled No Fear: Tales of a Change Agent or Why I Couldn't Fix Nortel Networks. The book is a business memoir describing the fall of Nortel Networks from Dempsey’s perspective as the former head of Organization Development.
Nortel Networks was a telecommunications and data networking equipment manufacturer founded in 1895. At its height, the corporation had a network capitalization of over $200 billion and employed over 100,000 people worldwide. In January of 2009, Nortel declared bankruptcy. In No Fear: Tales of a Change Agent, Dempsey, who worked for the company for seventeen years in a variety of roles, begins to explain what led to this corporation’s demise and details his personal efforts to effect change.
Excerpt from book description:
During [the author’s] journey, he had promised many employees and colleagues that he would never stop trying to leverage the learning that he was getting from all the painful transitions, be they failed projects or downsizings. The essence of that learning is captured in this book. The illustrative anecdotes are set in business and market contexts to illustrate how a great, multinational corporation could fail from a weak culture. The book should prove enlightening to ex-Nortel employees, customers and shareholders, but also to Organization Development, Change Management and other Human Resource professionals. The reflections and conclusions are research and data based so that the external view of what happened is attuned with the author's internal view.
After working on this book for several years, Dempsey was able to see his work published with the help of a successful Kickstarter campaign, which raised over $4,000. The decision to complete this work was inspired by commitments he made to himself and fellow employees during Nortel Network’s final days.
“As an executive, killing projects and laying people off was the hardest work I've ever done,” he said. “I made commitments to people to always learn from tough decisions and actions.  I decided to write the book to continue to honor those commitments by sharing the learning that I had accumulated over the years.”
After graduating from SILS, Dempsey held a career in finance and as the Business Librarian at UNC before joining Nortel. He feels that his time at SILS has been instrumental in his professional and personal development.
“SILS always has and always will be part of who I am,” Dempsey said. “In leadership assessment tests, I was labeled, among many other things, as a ‘connecter.’ I never stopped the practice of SDI, selective dissemination of information—always reading, always sharing books, articles, etc., always connecting people to each other. I think this whole aspect of who I am was formed at SILS.”
To learn more about the author, visit timfdempsey.com. No Fear: Tales of a Change Agent is available for purchase online.
"From my first day in the master’s program to wheeling around a double stroller at graduation, I always felt personally and professionally supported."
-Cassidy R. Sugimoto (PhD'10)