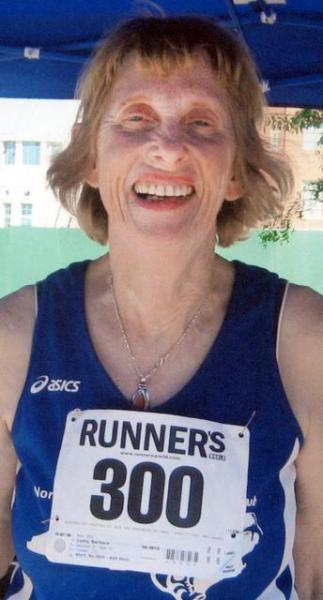 Barbara Stanley Latta (MSLS ‘64), an alumna of the University of North Carolina at Chapel Hill School of Information and Library Science (SILS), has run her way into international record books. At 72-years-old, Latta holds the record for the longest running streak of any female in the world (verified by the Running Streak Association, Inc.). Latta has run at least one mile, but often many more, every day for the past 30 years. Over the course of these years, Latta has run in all 50 states in the nation and all seven continents and has achieved several incredible feats.

How Running Began for Latta
Latta began her running routine one morning before going into her job as a school librarian at Brooks Elementary School in Raleigh, N.C., and she quickly became hooked. Under the encouragement of coworkers, Latta began running every day, with no intention of setting records.

“When I first started running every day I had never heard of the Running Streak,” Latta said. “My principal where I was working, Dr. David Fowle, encouraged me to start running.  He is a marathoner. He told me to run and then he told me to keep it up. He did tell me I could miss one day a week but I thought if I miss a day I might not start back and so I ran every day.”

Latta began keeping track of her runs in a small date book. The following year she began recording her miles in a log book. Now, her son gives her a new log book for Christmas each year to record all of her running miles.

Her family has been greatly supportive of her running throughout the years. Her brother was even the first to give her a pair of running shoes and continues to run with her occasionally.

“At first my husband made comments such as, ‘Are you going to get up again in the morning and run?’ Now he just knows I am going to get up, so he doesn't even ask,"   Latta said. “I get up at 5:00 a.m. and go run. I am out the door before I even think what I am doing.  It is such a habit that I just go run before anything else happens.”

In addition to her daily runs, Latta has had unique experiences while running internationally, from running alongside penguins to dining with a foreign ambassador. 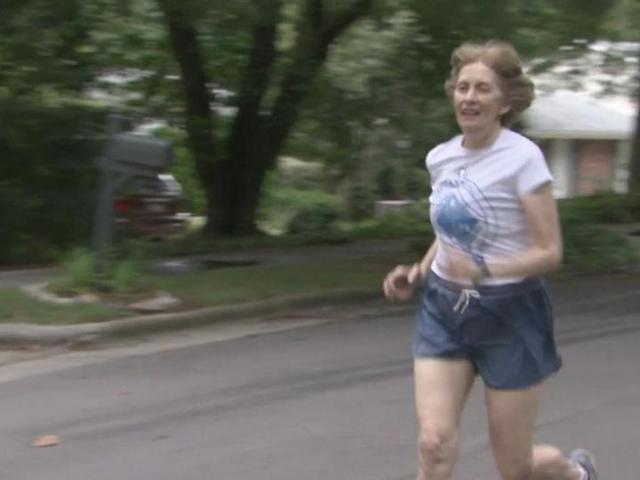 Visiting the Continents - Especially Antartica
In 1998 Latta and her husband traveled to Antarctica to complete her goal of visiting all seven continents. The trek from Raleigh, NC to Antarctica spanned two weeks and included trips from Raleigh to Miami, FL, from Miami to Santiago, Chile, and from Chile to Ushuaia, Argentina, where they ultimately boarded a ship to Antarctica.

“Sir Randolph Fines was on our ship,” Latta said. “He is the only person who has ever circumnavigated the world without air supply. He lost a couple of toes on one foot and another toe on the other foot crossing Antarctica. Sir Fines led all of our explorations on the continent of Antarctica.”

Latta and other passengers left the ship two or three times a day to explore Antarctic land. While exploring, she was required to wear boots and a bright red coat that would make her easier to identify in case she became lost in the snow.

“When Sir Randolph led a group, then I would follow him,” she said. “We went where people had never been before.  We never knew what we would see as we climbed the snow mountains.  It was hard to run going up the mountains and I followed in the footsteps of Sir Fines.  Some places he had been before but some treks were even new to him.  On the way back down the snow mountain some people would sit down and slide.  I would run down the mountain all the way to the coast.”

Despite the frigid temperatures, Latta still managed to keep up her running every day, going as far as she could while remaining in sight of the ship.

“I ran in just the snow.  There are no roads, no markers and nothing but snow, penguins and walruses,” she said. “I had to run in and out of the thousands of penguins.  At times the penguins were following me.” 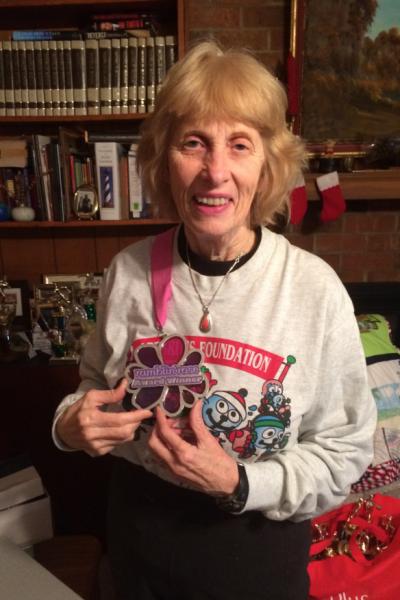 Liberia – Teaching the Teachers
In 2008, Latta traveled to Liberia through a church mission trip. The Liberian people have been building schools and churches for years to help rebuild what was destroyed by a civil war in the country, and Latta’s church received requests for textbooks and aid and resources.

“Then came the request for a Librarian to come to show the teachers how to use the textbooks and how to set up a library,” she said. “This was when I decided I had the call to go to Liberia to teach the teachers.”

When she first arrived, finding a place to run was an experience in itself.

“When I got up my first morning I left the safety of the compound and went to run on the beautiful beach,” she said. “I kept noticing that there were men squatting down in the sand along the beach. It took me several minutes to realize they were using the beach for a bathroom.  I quickly ran from the beach and started running in the roads.”

After running in the road for a while, she noticed two men running nearby. When Latta passed them, she greeted them in English, and upon realizing that she was American, one of the men engaged her in a conversation about U.S. politics. After running and talking together for a few miles, Latta arrived at her home for the trip, and the man revealed his identity.

“When we got to the gate I told him that this was my home for two weeks and I could not bring them into the gated quarters,” she said. “There were guards at the gate.  He stopped and said, ‘I understand. I am the Ambassador to Liberia from Lebanon.  I live in the embassy which we passed.’"

He then invited her to continue their conversation at the embassy later that week.

“It was a beautiful embassy,” she said. “He served lemon grass tea and cookies from Lebanon.  We had a terrific visit. Then he took me outside to see his garden. He does not have a garden.  He had cinnamon trees, orange and banana trees. He had pineapple trees. It was great.”
Latta and the ambassador still keep in touch today.

Running Through Other Countries
Latta has run in many other countries, and some of this travel has forced her to get creative in choosing running locations.

In one trip to Cuba to help rebuild a church, Latta ran a mile back and forth on the porch because it was too dangerous to run outside.

After the massive 2010 earthquake in Haiti, Latta travelled to the country as a volunteer. The building in which she stayed was surrounded by a locked fence, so Latta ran on the roof. 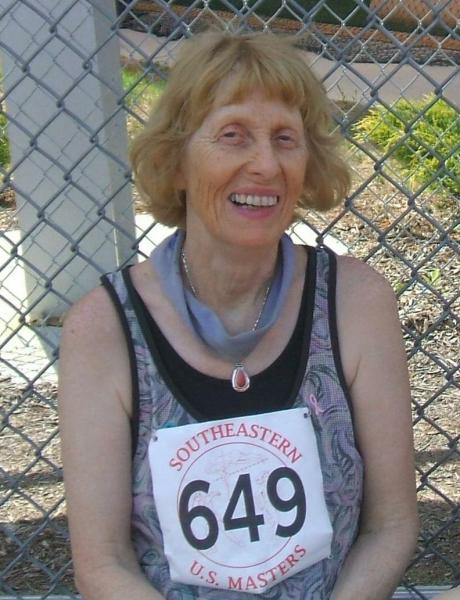 Participating in Many Races
Latta participates in numerous races throughout the year in the United States and beyond. So far, she has run four marathons and many half marathons. In 2013, she participated in her first triathlon.

“I did the Ramblin Rose Triathlon in May, 2013,” she said. “After the swim I was four minutes behind.  After the bike part I was about even with the second place woman in my age group.  After the run I was eight minutes ahead, so the running helped me win the triathlon.”

In 2011, Latta was able to participate in the Peachtree Road Race in Atlanta, GA, the largest 10K race in the world.

“Lost among the 65,000 other runners I was excited, scared and happy to be there,” said Latta.  “In the end I did place first in my age group of 126 women from all over the world. It was my most thrilling moment to have won first in such a great race that always takes place on July Fourth.”

She also participates in a number of charity runs throughout the year.

“This year (2013) I have run for the Red Cross, Autism Society, COPD and many others,” said Latta. “I run about 20 races a year.  This year my races ranged from The Magnificent Mile to the City of Oaks Half Marathon and many 5K races in between.”

Celebrating Her 30th Anniversary of Running
When Latta finally achieved her 30th running anniversary in December, friends and family made sure to commemorate the milestone run.

“I had never celebrated running another year until my 30th anniversary when running friends surprised me by meeting me on my usual run around the lake,” Latta said. “About every quarter mile some more people would join me with the two mile run back to the parking lot.  I was very surprised and very pleased.  They had to be good friends to get up and be at Shelley Lake shortly after 5:00 a.m. to run with me.  I certainly did appreciate the support and the reminder of my running 30 years.”

When she is not running, Latta enjoys biking with friends, reading, cooking and participating in church activities and volunteer work. She is also a member of the Citizens Emergency Response Team, a group of volunteers who are trained to help first responders in a major emergency.

At the end of the day, running remains Latta’s passion, and she intends to maintain the running streak as long as she can.

“I enjoy the quiet stillness of the early morning with only the birds, squirrels, rabbits and the deer.  I like to run through the dew in the grass and leave my foot print,” she said. “I run around a lake and look at the geese sleeping in the water.  I cross a bridge and wake a blue heron that comes flying out from underneath. The aroma of the air is fresh and clean and it is the best part of the day.  When I get to see the sun rise that is just an added bonus of the joy of running.”