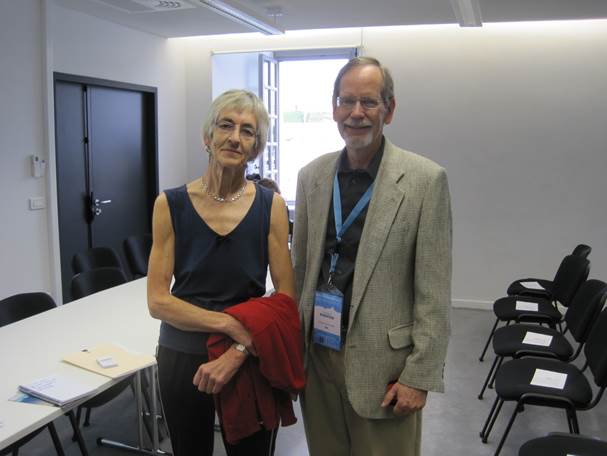 Dav Robertson (MSLS ’75), alumnus and professor of the practice at the School of Information and Library Science (SILS) at the University of North Carolina at Chapel Hill, represented the Metadata Research Center (MRC) as a panelist at the 2013 Digital Heritage International Congress on October 29th in Marseille, France.

The panel, under the auspices of the UNESCO Memory of the World project, addressed the topic, “A Joint Heritage: Where Science and Culture Meet,” and included specialists in the sciences and the humanities. The panel discussion was organized and introduced by the Committee on Data for Science and Technology (CODATA) Task Group, "Data At Risk (DARI)."

Robertson described the MRC’s Data At Risk Initiative (DARI) which works to illuminate the growing problem of endangered pre-electronic data sets and takes action by helping in the data rescue mission.

“The Data-at-Risk Initiative is a project of the Committee on Data for Science and Technology (CODATA) Data at Risk Task Group to create an inventory of valuable scientific data that are at risk of being lost to posterity.”

“We know that older data can yield new science, and that data not digitized and available is ignored and not retained” said William L. Anderson, adjunct assistant professor, School of Information, University of Texas at Austin.  “It is important to find, appraise, and rescue many of these at-risk datasets.  An inventory of data-at-risk will help guide choices for data rescue efforts.”

Examples of at-risk data include paper documents, photographs, laboratory notebooks, certain forms of digital data and more. DARI has been co- led by Dav Roberston, along with SILS professor and director of the MRC, Dr. Jane Greenberg and Anderson. DARI was established with support from the International Council for Science:  Committee on Data for Science and Technology (CODATA) Data At Risk Task Group in 2011. UNC’s Global Education Center also granted support for a student working group, led by Cheryl Thompson (MSIS ‘12), now a doctoral student at University of Illinois, Urbana-Champaign.

“Dav has been an inspiration and champion for the student engagement in DARI,” said Greenberg. “The project has served as a learning commons for a couple of years, and we’ve sent students to various places in the U.S. and abroad to Tolouse, France; Amsterdam, Netherlands; and Tapei, China” through this project. It was time for Dav to represent the effort abroad.”
The Digital Heritage International Congress was the largest international scientific event on digital heritage in history. The CODATA panel was moderated by Astrophysicist Dr. Elizabeth Griffin and included five other panelists from institutions across the world. In addition to describing their own projects, panelists engaged in lively discussion of the decision-making process surrounding the selection of data collections to be preserved, the importance of metadata standards for documenting the collections, how to digitally preserve images of non-digital data, instances of old data being re-purposed, and the benefits of preserving pre-electronic data to our heritage and culture.

The above photo includes Robertson and panel coordinator, Elizabeth Griffin.