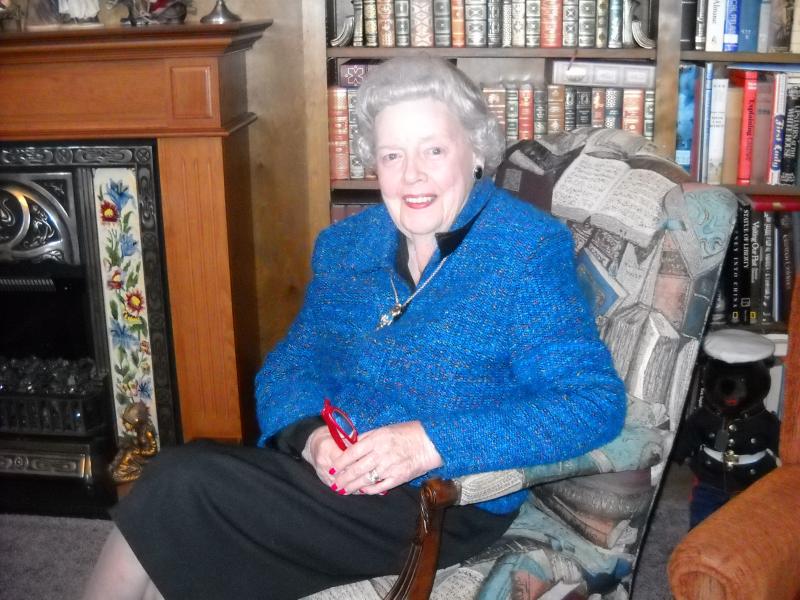 Once upon a time, a graduate of the School of Information and Library Science at the University of North Carolina at Chapel Hill took her talents and education into an interesting and unplanned direction. Like Robert Frost’s poem, “The Road Not Taken,” Elinor Dixon Hawkins (BSLS ’50) “took the one less traveled by and that has made all the difference.”

With a love of books and children, Hawkins initially served as a children’s librarian at the Enoch Pratt Free Library in Baltimore, MD where she worked with Emerson Greenway, the library director there at the time.

“It was such an honor to be working at the Enoch Pratt Free Library,” said Hawkins. “I wrote home to my parents to tell them that I love my job so much, I’m willing to work for free. Of course, my father told me to make sure I accepted a paycheck.” 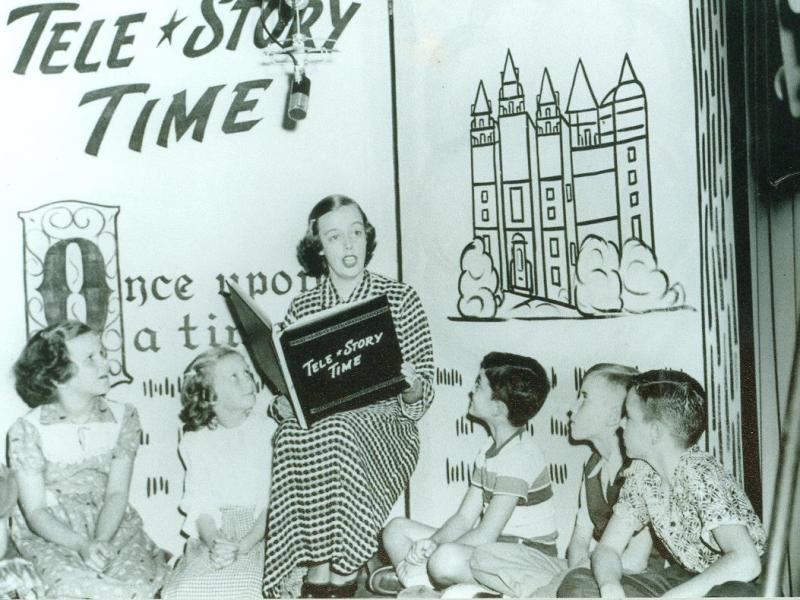 Hawkins later moved to Greensboro, NC, where she worked as head of circulation at the Greensboro Public Library. It was also in Greensboro where an unexpected opportunity arose. She learned about, auditioned for and obtained the position on a children’s television show on WFMY TV, channel 2 called “Telestory Time” shortly after the show began to air in 1952. Every Monday afternoon, Hawkins read  stories that were broadcast to communities within the Greensboro televised viewing area. She quickly became known as the Story Lady. In 1958, Hawkins and her husband Carroll, whom she met while a student at SILS, moved to be near his family in Cove City, NC. In 1963, just three months after the station opened, Hawkins began the “Telestory Time” broadcast on WNBE Channel 12 (now WCTI-12) in New Bern, NC. The popular show, which was featured nationally in the Dec. 2, 1967 issue of TV Guide, continues to this day.

Over the years, the “Story Lady” has introduced and shared stories with thousands of children and adults alike. The Story Lady encouraged children to read books at their local libraries and to expand their minds through reading.

Library Advocate and Director of Libraries
In addition to her television show, Hawkins has been a driving force for libraries, bringing in books and informational resources by creating libraries and serving as public library director in three counties in eastern North Carolina. She has been giving back to the communities she serves by providing access to books - especially for those who live in rural areas - establishing eight libraries that ultimately became the Craven-Pamlico-Carteret Regional Library System.

“I came to New Bern at an opportune time,” said Hawkins. “We knew we needed space for a library and the 1770 John Wright Stanly House, which was a two-story historical house in New Bern, allowed us our beginning. On the first floor we had rooms for circulation, fiction, non-fiction and children’s materials. My office was in the parlour, and we rented the upstairs rooms.”

Hawkins worked with the Commission of the Tryon Palace to gain approval to move the historic Stanly House to the Palace grounds where it still stands today.

The library was moved to a new building, also an historical house, on Johnson St. in New Bern. Twenty years later, a need to expand the building became apparent, which required a move. In addition to arranging for the move, including attending three hearings about moving historical buildings, Hawkins was responsible for successful fundraising and the opening of the library to the public. An outcome from the move included the gift of the property where the house had been located, which helped with the expansion of a new library. It was also the beginning of the sometimes difficult challenges that lie ahead when creating libraries.

“My mother always said to never give up,” said Hawkins. Even during some rough times, Hawkins followed her mother’s motto and never gave up.

The State Library in 1962 promoted the establishment of regional libraries under the direction of then state librarian, Frances Gish. Hawkins worked closely with Gish to help create regional libraries in the rural areas of eastern Carolina. She had a knack for taking unusual locations and buildings to create library spaces. For example, she used a sheriff’s office that resulted in the Havelock Library, a train station in Carteret County, a women’s club house in Vanceboro, the use of a locked cabinet in a firehouse in Newport, an old jail with bars on the windows in Pamlico County and even a closet that was the beginning of the Cove City Library. Each space grew into libraries such as the Craven Pamlico Hardwick Regional Library, the Pamlico County, Vanceboro, Havelock, Newport, Pine Knoll Shores and Cove City libraries.

Because of her dedication, hard work, fundraising and negotiation skills, the humble beginnings of libraries in the rural areas of the state are equipped with books and materials for the communities they serve.

“I have had excellent library boards in all my libraries,” said Hawkins. “I’ve always had excellent support and couldn’t have done what I was able to do otherwise.” 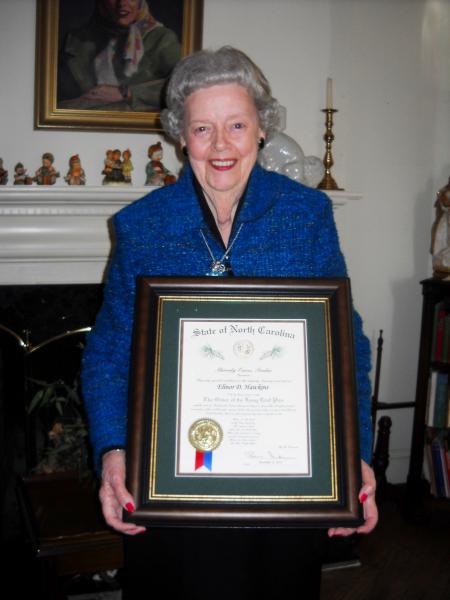 The Order of the Long Leaf Pine
Hawkins has been the Story Lady for more than 55 years, and she has diligently worked to create a system of libraries that have made resources available to all. She was appointed by the Governor to serve on the Tryon Palace Commission in 1974 and maintains that appointment to this date. She has also served on the Salvation Army Board since 1976, and has overseen the dressing of the dolls and bears for the Salvation Army in New Bern for the last 25 years.

For her contributions and dedication to giving back, Hawkins was presented with the State of North Carolina’s most prestigious citizen award, the Order of the Long Leaf Pine, signed by Governor Bev Perdue. The award is the highest honor presented to a civilian. Those who have previously received the award include Maya Angelou, Billy Graham, Andy Griffith, Michael Jordan, Charles Kuralt and other notable North Carolinians whose contributions have made a long-lasting impact.

“I was in complete shock when I was presented with this award,” said Hawkins. “I never expected to be recognized for the work I’ve loved so much.”

Their personal library is a large space that hosts thousands of books proficiently arranged from floor to ceiling. Hawkins’ prized collection, however, are her The Night Before Christmas books, figurines and other objects like a teddy bear that reads the poem.

“Lucile Kelling Henderson [professor at SILS from 1932 to 1960 and second dean 1954 to 1960] assigned us a project to write a paper about a book we wanted to collect,” said Hawkins. “Mother had been reading us The Night Before Christmas since we were babies. I wrote the paper and began collecting the books while still in Chapel Hill.”

Her collection includes over 1,000 volumes of the book in various forms.

Earlier this year, television station WCTI-12 in New Bern, N.C. celebrated the 50th anniversary of the Story Lady and "Telestory Time." The mayor of New Bern declared the date of January 10, 2014 as Elinor Dixon Hawkins Day in her honor.

The Story Lady Celebrates 50 Years of Telestory Time link to the WCTI-12 broadcast.

Reading stories to thousands of children across North Carolina for over five decades and working to create libraries where they could continue to grow and learn, all while developing her own library, how else could we end this story other than - and she lived happily ever after.