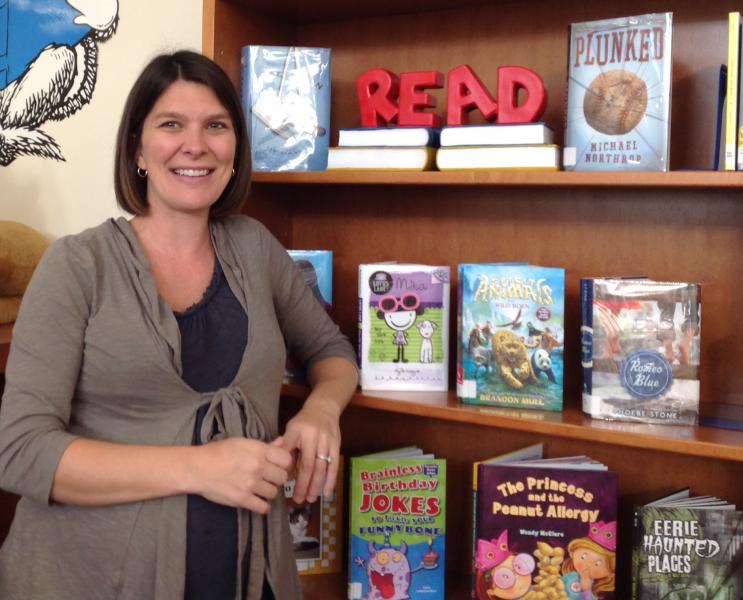 Now in her second year as the school librarian at Chapel Hill’s Northside Elementary School, Kathryn Cole (MSLS ’07) has already crossed one big item off of her professional “bucket list:” designing a school library program and its collection from the ground up. Northside opened to students in August 2013, and Cole, who transitioned to the new school from Franklin Porter Graham Elementary earlier that year, was one of five original staff members who developed the groundwork for the school, which she calls “a special, rewarding and exhausting experience” (you can read more about it in her blog post).

Though only seven years into her career as a school librarian, Cole has already become a leader in the profession and obtained her National Board Certification for Teaching in School Media in 2010, a rigorous process that involves a year of intense reflection and data collection.  She has a big vision for the future of her school library program that focuses on empowering and supporting students and their families as responsible digital citizens, readers, and discoverers, creators, and sharers of knowledge. In pursuit of this vision, she has concentrated on using technology within her school as a tool for creation, collaboration, and connection versus consumption, for example by using SKYPE to allow students to work collaboratively with their peers in other schools. Extending the library’s reach beyond her library’s walls to her students’ families has also been a priority for Cole, who hopes to start a “Baby Birthday Club” in which families in the school who have a new baby would receive a basket of board books to support early literacy development (she already offers a birthday book program for current students). “I think there is a lot of work we can do with families within our community to help build a bridge of understanding how critical early literacy is to later school success,” Cole said of these plans.
Ultimately, Cole hopes to build a library program at Northside that is fully collaborative in scope. “My goal,” she explained, “is for the library space to be a creation center and active learning space​ in which students are constantly engaged in inquiry and creation.” She is well on her way to this goal already, a fact which she attributes at least in part to her time at SILS: “​My experience at SILS gave me a strong foundation in my belief structure in how I approach the role of a school librarian and the role of libraries within schools....  The conversations and dialogue within classes amongst peers and professors while at SILS provided a stimulating and engaging atmosphere that has carried into my career as I look to continuously seek to communicate the positive impact libraries and librarians have in our communities and schools.”
Want to know more? You can read about the Northside Elementary library program and their vision here.   You can also connect with them via the library’s Facebook account, Twitter Account, Blogger page and Pinterest page.  ​Finally, the Northside Elementary library website (while still a work in progress in some areas) has all these things and a bit more.
"I believe in libraries and everything they can do to make a community stronger. And librarians and library staff are at the heart of that serve. We make it happen."
-Jennifer Lohmann (MSLS'06)