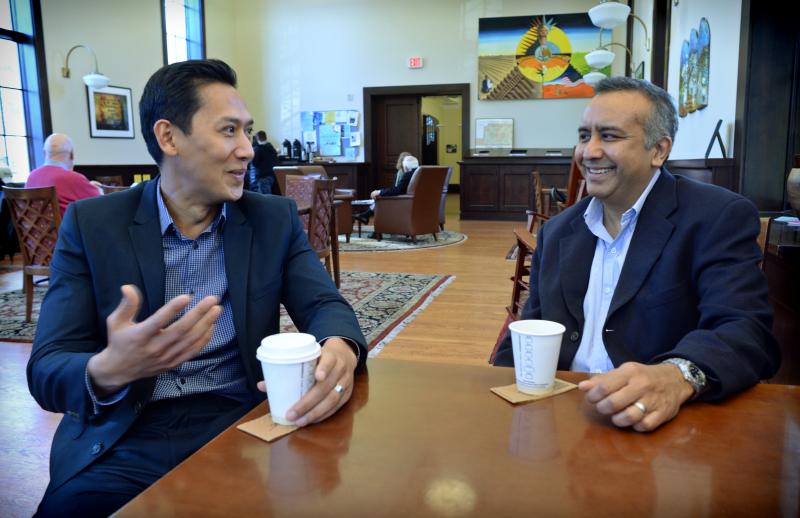 An acceptance letter from another university was on the table and UNC’s Javed Mostafa had the next move.

He countered Oakkar Oakkar’s letter with a deal that few, if any, universities, could beat: the opportunity to help start a company while Oakkar earned a degree.

Oakkar, a successful technology entrepreneur from Hawaii, had walked into Mostafa’s office a week earlier to talk about his plans for a new career in health care informatics – a discipline at the intersection of information science, computer science and health care.

“I have always believed in this notion of translating research into products and services that will have a real impact beyond its life in a research publication,” says Mostafa, a jointly appointed professor at the University of North Carolina at Chapel Hill’s School of Information and Library Science (SILS) and the Biomedical Research Imaging Center and deputy director of the Biomedical Informatics Core at the North Carolina Translational Clinical Sciences (TraCS) Institute.

“We want to be a first-class scholarly institution, but we also want to develop these other dimensions that can have real impacts on the world,” Mostafa says. “And within the scientific context of medicine, there are abundant opportunities to do so.”

Transform how patients communicate with doctors
Oakkar wanted the same kind of opportunities that Mostafa wanted, so Mostafa offered Oakkar the opportunity to help him start a company that would use technology to transform the way patients communicated with their doctors and scheduled care.

Every year, in doctors’ offices across the country, nurses and staff spend countless hours fielding calls from patients and writing down the information patients give them about their symptoms. Some of those calls are quick; others drag on and on.

What if a company could develop software so patients could go on-line and type in all the same information before they called the doctor’s office for an appointment? Such a system would reduce waiting time for patients and save doctors hours of non-billable time that nurses and staff spend on the phone. The potential cost savings could be enormous.

Would Oakkar like to develop that software? “Definitely,” Oakkar said.

By May 2011, Keona Health was named one of 12 new scientific and technology firms showcased by Carolina KickStart along with the UNC Kenan-Flagler Business School, UNC Office of Technology Development and the Renaissance Computing Institute (RENCI).

With seed investments and a grant from the National Institutes of Health’s Small Business Innovation program, Keona got its first big break in January 2011 when Mary Covington, the director of Campus Health Services (CHS) agreed to let Keona test the system for a semester, starting in January 2012.

Students fill out their medical histories using an intelligent interview with the industry standard Schmitt-Thompson telephone triage protocols. The system automatically creates a summary clinic note for a nurse to review, along with guidance on assessment and educational content. After completing the review, nurses can respond to a student with a single click. Finally, all the information is copied into the system and routed to the appropriate provider.

Because nurses at CHS helped to design the software, it is easy for other nurses to learn and use, Covington says. By using it, nurses at CHS can handle each case five times faster. And in 10 percent of cases, a student can get the care he or she needs without an office visit says Covington, who remains a satisfied – and permanent – customer of Keona Health.

In July 2012, Keona began pilot programs with UNC’s Department of Obstetrics and Gynecology.

In October 2012, it launched at Tulane University Health Services. Keona’s success has been noticed within the healthcare industry, by the media and those following developments in health data.

In January, the company was admitted into the Blueprint Health accelerator program, which is designed to help promising startups seize unrealized opportunities to tackle rising healthcare costs.

The company was mentioned in a July 2013 Wall Street Journal story about how patients inundate doctors’ offices with phone calls and how Keona Health’s software could help doctors’ bottom line as they make the transition from fee-for-service models to value-based care under the Affordable Care Act.

As Mostafa sees it, Oakkar got everything he bargained for when he came to Carolina – and more. A little more than a year ago, he married Eva Erber, who is a doctorate student at UNC’s Gillings School of Global Public Health. Oakkar is expected to complete his master’s in information science degree in clinical informatics from SILS this semester.

Mostafa, who remains the scientific adviser and chair of Keona Health, is also convinced getting Oakkar to Carolina is one of the smartest moves either he or Oakkar has ever made.