The University of North Carolina at Chapel Hill ranks first among the nation’s public universities in The Princeton Review’s list of the 2014 “Best Value Colleges.”

The Princeton Review ranks schools based on its analysis of more than 30 data points with cost data reflecting school-reported figures for 2013-2014. The company also factors in data it collected over the past three academic years from its surveys of students about their satisfaction with their financial aid awards and academic experiences at their schools. 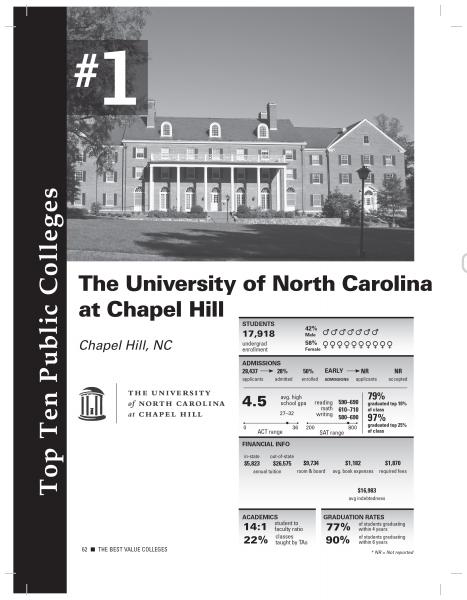 In a separate list of private universities, Williams College came out on top. The complete list, with individual school profiles, is available at http://www.princetonreview.com/best-value-colleges.

The Princeton Review list also is featured in the education services company’s book, “The Best Value Colleges: The 150 Best-Buy Schools and What It Takes to Get In,” and in reports published Tuesday (Jan. 28) by USA Today at http://bestvaluecolleges.usatoday.com. Online users can access information about each college and sort the list in useful ways including by state, tuition, enrollment and average grant. The Princeton Review has teamed with USA TODAY to present this resource online since 2009.

The rankings also were featured on NBC-TV’s “The Today Show,” http://www.today.com/money/which-public-private-colleges-offer-best-value-2D12001608.