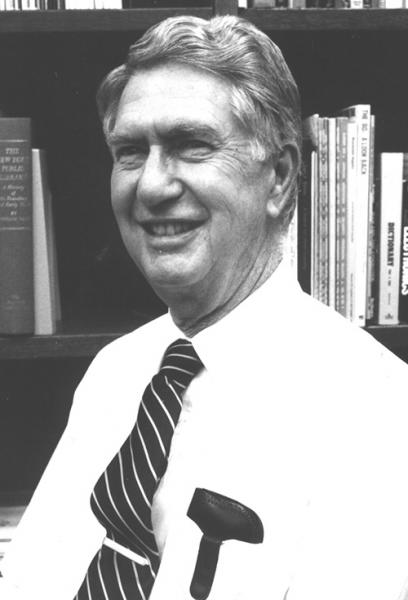 Robert Newton Broadus, long-time faculty member at the UNC-Chapel Hill School of Information and Library Science (SILS), passed away on March 19, 2015, at the age of 92.

Broadus was a professor at SILS from 1976-93 and greatly influenced many students during his tenure. He authored a widely-used book on library collection development, edited or co-edited two other books, and contributed scholarly and professional articles to books and periodicals in several academic fields. His publications were referred to frequently by writers in information science and other fields. For his contributions to library education, he received an award from the American Library Association, which cited his "insatiate curiosity, . . . extensive publications, . . . acute and sophisticated sense of humor, . . . intellect.... rectitude, ...sense of purpose, and ... quiet dignity."

Born in Lancaster, Ky., Broadus attended Pepperdine College, Los Angeles (B.A.); the University of Chicago (B.L.S.); and the University of Southern California (Ph.D.). Prior to coming to SILS, he served eight years as a college librarian, worked five years with the marketing division of the Sperry Rand Corporation, and was a professor at Northern Illinois University at DeKalb from 1955-56 and 1961-76.

Broadus is survived by his wife, Eleanor, and their two sons, John Robert of Carrboro and Earl William of Durham. Broadus and his wife lived in California, Tennessee, and Illinois before moving to Chapel Hill in 1976, and to Carol Woods in 1997. He was a member of the Cole Mill Road Church of Christ, Durham. Among his interests and hobbies were platen press printing (in high school years, he managed a small print shop), woodworking, gardening, reading, listening to phonograph records, and croquet.