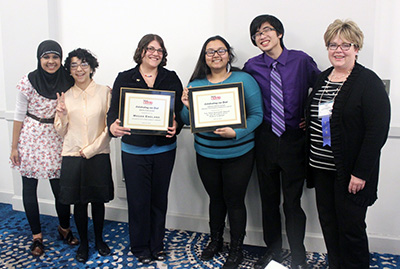 Megan England (MSLS '13), alumna of the School of Information and Library Science (SILS) at the University of North Carolina at Chapel Hill, was named a Rising Star at the annual New Jersey Library Association (NJLA) Conference Honors and Awards Reception on April 21. England, an Atlantic City Free Public Library Teen Services Librarian, was one of just three librarians in the state to receive the award, which honors NJLA members with less than five years of professional experience for innovative and creative work.

In addition, the Atlantic City Library’s Teen Advisory Group (TAG), which England coordinates, was the recipient of the NJLA’s Library Service Group Award. This honor is presented to individuals, Friends of the Library, or library groups for their contributions to the community.

“We are so proud of Megan and the TAG members for receiving these awards,” Library Director Maureen Sherr Frank said.  “It is wonderful to see their outstanding service to the Atlantic City community recognized by the New Jersey Library Association.”

England joined the Atlantic City Library staff in 2012. She coordinated the creation of the library’s makerspace, which provides Atlantic City teens with access to technology — such as a 3D printer, audio, video and photography equipment, and robotics — and a variety of tools. Also, England completed the NJLA’s Emerging Leaders program earlier this year.

Jen Schureman, Head of Youth Services at the Gloucester County Library System, nominated England for the Rising Star award, saying she “exemplifies what a librarian should be.”

“It means a great deal to me that the things we do here at ACFPL are making an impact,” England said. “Librarians don't pursue this career only because we love books, though that's certainly part of it; it's because we love serving the public and want to make an impact in our local communities. I hope this award means that the work I've done here has made the library and the city a better place for teens. I love what I do!”

The library has more than 20 TAG members who volunteer to help the Youth Services Department with programs, displays and other tasks. They also provide valuable input about what resources and programming teens want and need at the library.

“Our teen volunteers play such a vital role in the way the Youth Services Department operates,” said England, who nominated the teens for the Service Award. “They assist with program planning, displays and events throughout the year. They donate their time to help make our library more beautiful, organized and engaging for Atlantic City’s children. I’m so proud of them, and so thankful.”