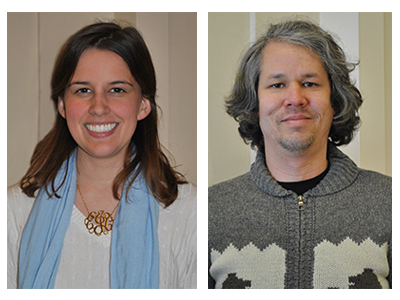 Two $1,000 merit-based scholarships for newly admitted undergraduates in the School of Information and Library Science (SILS) Bachelor's in Information Science (BSIS) degree program have been awarded to Ellanor Jordan and Lincoln Sward for the spring 2015 semester. The scholarships are presented in the spring and fall semesters to two students who have demonstrated high scholastic achievement and written outstanding essays.

Jordan, who is from Greensboro, N.C., said she took many different courses in departments across campus before finding the BSIS program.

“After taking my first INLS class, I realized this field is what I want to pursue,” she said. “It is technical, yet highlights the user and his/her needs. I love the critical thinking and real world applications that are used in my courses. Information Science is such an integral part of our society and I feel that majoring in it will equip me with the right set of tools and knowledge to make an impact in whatever I do.”

Jordan is looking forward to applying what she has learned through the BSIS program in an internship with Credit Suisse this summer. Long-term, she is contemplating graduate studies in Information Science and is interested in working more with human-computer interaction.

Sward was drawn to the BSIS program because it evaluates technology from multiple angles. “I like that Information Science is interdisciplinary and that I have more room to explore technology topics that interest me,” he said.

Sward, who has resided in Chapel Hill since 1995, plans to work as a systems analyst or data engineer/analyst after graduating and eventually pursue a Ph.D. in Information Science.

Both Jordan and Sward are elated to have received the $1,000 scholarships this spring.

“I am very grateful for such a generous award,” Jordan said. “It means a lot that my professors and advisers see my passion for Information Science. I appreciate the unwavering support SILS demonstrates toward its undergraduate students.”

“It feels good to have people believe in you enough to invest in your future,” Sward said.

The BSIS program is accepting applications until March 1, 2015. Click here to apply.

About the BSIS Program

Our graduates go on to work at organizations such as Apple, Blue Cross and Blue Shield, Credit Suisse, the Federal Bureau of Investigation, Progress Energy, SAS, CISCO, the Department of Homeland Security, Aetna, Lulu Enterprises, MetLife and the United States Census Bureau, to name just a few.

Some of the exciting, emerging and growing fields of information science that students may wish to explore include: