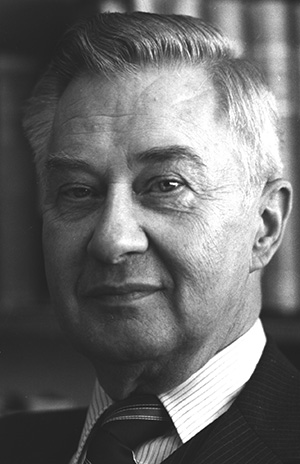 William Stevens Powell, the acknowledged dean of North Carolina historians and an alumnus of the UNC-Chapel Hill School of Information and Library Science, died April 10, 2015, at age 95 in Chapel Hill.

Powell graduated from Mitchell Junior College in 1938 and from Carolina in 1940, then served in the Army in World War II. After the war, Powell returned to Carolina to get a master’s degree in history and a bachelor’s degree in library science. He became a researcher for the North Carolina Department of Archives and History then served as the librarian of the North Carolina Collection from 1951 to 1973. He then taught history at the University from 1973 to 1986, writing volume upon volume of history about his home state well into his retirement.

Powell is survived by his wife and fellow researcher of 63 years, Virginia (BSLS ’52) and three children, John Powell of Raleigh, Charles Powell of Concord, and Ellen Feild of Lynchburg, Virginia. A private memorial service will be held. Memorial contributions may be sent to the William S. Powell Fund at North Caroliniana Society, c/o Wilson Library, Campus Box 3930, Chapel Hill, NC 27515-8890 or to Duke Homecare and Hospice at 4321 Medical Park Dr. #101, Durham, NC 27704.

Excerpts from a story by Susan Hudson, University Gazette. Click here to read the full story.