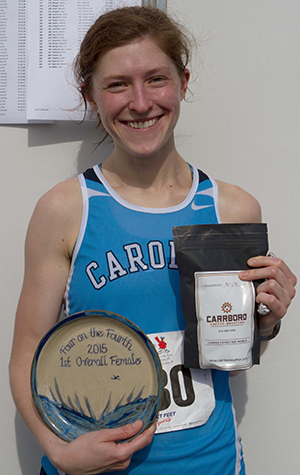 Hale, who is earning a dual degree in information science and art history with the intention of becoming an art librarian, has been running for about seventeen years. She ran Division-I track and cross-country for two years as an undergraduate at Syracuse University, coached at Magnificat High School for a year, and interned at USA Track & Field for a summer.

Hale has placed first in a number of races and said winning the Green Jewel 50K and the Inland Trail Marathon are among her proudest racing achievements. The Green Jewel covers most of Cleveland's Emerald necklace, and as a resident of Cleveland at the time, Hale was familiar with many of the paths. “It was a really unique and fun experience to get to string all of these routes together into a single run on a snowy winter day,” she said. 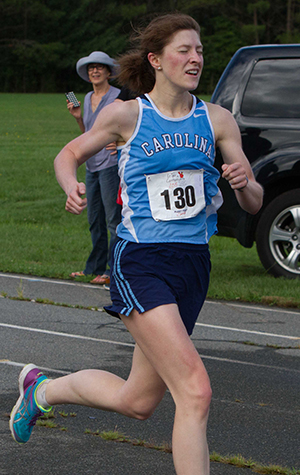 Hale decided to run the Inland Trail Marathon at the last minute after her plans to run the New York Marathon were thwarted by Superstorm Sandy in 2012. After a disappointing drive from Ohio to NYC and back again, Hale heard about Inland Trail in nearby Elyria, Ohio, and signed up the day of the race. “My dad was born and raised in Elyria, so that made it a special win, too,” she said.

Since moving to North Carolina, Hale has found plenty of opportunities to keep up the pace, including the running club at UNC-Chapel Hill and Parkrun in Durham. A free weekly timed 5K, the Durham Parkrun is one of just four currently offered in the United States.

“North Carolina has been a great place for me for running,” Hale said.  “This past year has been my best year of running yet.”

Photos of Meredith Hale at the Four on the Fourth Race, taken by Bob Sisk.

"I wouldn't have the position I have today if I hadn't taken a management class at SILS that left me wanting more."
-Emily Guhde (MSLS'12)