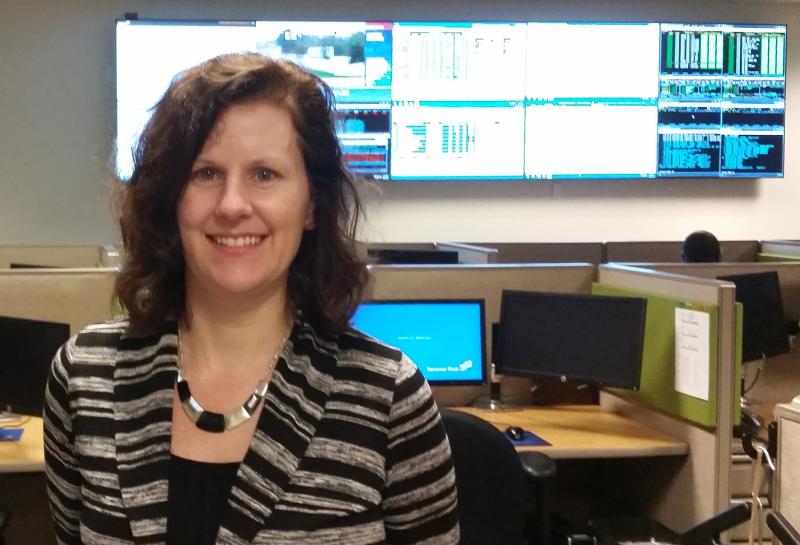 Returning to school after several years in retail management, Jennifer Bullock Rosario had a strong interest in computers and information technology, but didn’t want to focus too narrowly on the technical side of the industry. The Bachelor of Science in Information Science (BSIS) program, which had just been established by SILS when Rosario arrived on campus, caught her attention.

“I liked the BSIS approach to people, process, and technology,” she said. “I knew from my own work experience that those three need to go together. That’s what drew me to [SILS]–the fact that they seemed to get it. With the BSIS program, it was always important that you kept in mind the end user, why you were doing something, not just to support technology, but so that tech could enable whatever business you went into.”

The people, process, and technology mindset served Rosario well as she advanced through different infrastructure and operations positions with Progress Energy, and continues to be key in her current role as Vice President, Manager IT Risk Governance, at First Citizens Bank in Raleigh.

Originally from upstate New York, Rosario moved to North Carolina to manage a retail location for Gateway Computers, but after a company restructuring, she opted for a severance package and began taking classes at UNC. As part of a newly-launched academic program, Rosario worked to build relationships with other BSIS students and co-founded ISSUE (Information Science Student Undergraduates Empowered) with Trisha Crutchfield (BSIS ’04, MHA ’07, MSIS ’08) to help identify networking and career opportunities.
Rosario also recalls many positive interactions with SILS faculty, including Professor Paul Jones, who “just gave you a different perspective,” and the late Professor Deborah Barreau. “You could always go to her for anything,” Rosario said. “She really helped the student body in general feel like we had support.”

After graduation, Rosario went to work for Progress Energy, where her previous management experience helped her quickly transition to a position on the enterprise monitoring team. She worked with the company’s business partners to understand the impact of its IT systems, and helped develop standards and procedures for its 24-7/365 command center. When the formal protocol was complete, Rosario was tapped to become the company’s first significant incidence manager.

During that same time, Rosario was earning ITIL (Information Technology Infrastructure Library) certification, which familiarized her with a series of best practices for aligning IT services with the needs of business and provided a solid foundation for her transition to the information security team. Working in disaster recovery, she again collaborated with the company’s partners to identify what technology supported their key processes, how to prioritize those processes for timely recovery, and how to best mitigate overall risks.

Next, she and a small team triumphed by getting the Identity and Access Management project, which had been languishing for over a decade without approval, officially green-lighted. She was then assigned to the NERC-CIP (North American Electric Reliability Corporation-Critical Infrastructure Protection) compliance project, a challenge both because of its complexity and its stakes.

“The systems that run utility facilities are now required to have strict controls from a cybersecurity perspective,” she said. “Basically, you have to look at a system that is 40 years old and figure out how to get an anti-virus software to run on it.” Non-compliance can result in fines of up to $1 million per day, per incident, but Rosario and her team administered one of the best programs in the southeast, keeping fines to a minimum.

After the Duke/Progress Energy merger, Rosario looked outward for new opportunities and accepted her VP position with First Citizens Bank in 2012. Her current role has her once again focused on the ITIL principles of technology management for business, from anticipating and managing incidents to predicting and implementing necessary changes.

Rosario advises current BSIS students to constantly challenge themselves and seek out opportunities to grow, and to balance their technical skills with “soft skills” like communication and collaboration. “When I was student, I didn’t like team projects, but team projects are the reality of the workforce,” she said.  “You have to learn how to work with different people, and realize not everyone is going to pull their own weight. How you adjust and how you handle those situations is what will make you standout and be a differentiator.”

This article originally appeared in the Fall 2015 SILS newsletter (pdf).