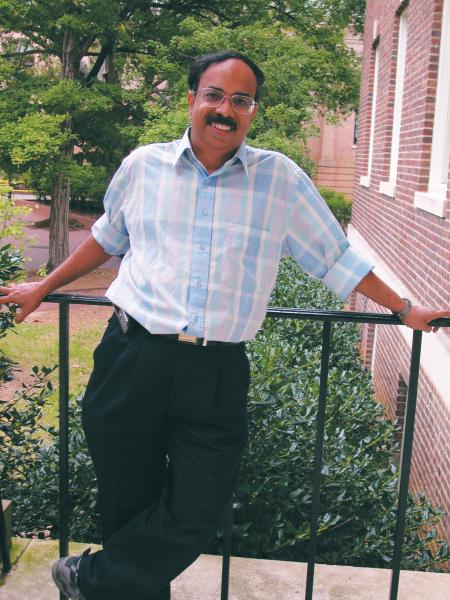 “Dr. Rajasekar has shaped a research agenda on large-scale data management that is central to the mission of an information school,” said Gary Marchionini, SILS dean and Cary C. Boshamer Distinguished Professor. “His work is funded by the NSF and other foundations, and he has developed new courses on data analytics and smart cities that enrich our curriculum.  He exemplifies the innovation and enthusiasm that the McColl Term Professorship represents.”

In addition to his appointment with SILS, Dr. Rajasekar is a chief scientist at the Renaissance Computing Institute (RENCI) and co-director of the Data Intensive Cyber Environments (DICE) Center at UNC. Previously he was at the San Diego Supercomputer Center at the University of California, San Diego, leading the Data Grids Technology Group. He has been involved in research and development of data grid middleware systems for over a decade and is a lead originator behind the concepts in the Storage Resource Broker (SRB) and the integrated Rule Oriented Data Systems (iRODS), two premier data grid middleware developed by the DICE group.

A leading proponent of policy-oriented, large-scale data management, Dr. Rajasekar has several research projects funded by the National Science Foundation, the National Archives, National Institute of Health and other federal agencies. He has a Ph.D. in computer science from the University of Maryland at College Park and has more than 150 publications in the areas of data grids, digital library, persistent archives, logic programming, and artificial intelligence. His latest projects include the Datanet Federation Consortium and DataBridge, building a social network platform for scientific data.

Hugh McColl, Jr. established the McColl Professorship in memory of his mother, Frances Carroll McColl, and sister, Frances McColl Covington. Hugh McColl said he was inspired to create the professorship by the school's needs and his mother's love of literature.

“My mother taught everyone in the family to love books, and we have prospered from having access to them and, perhaps more important, knowing where to turn to find the information we need,” McColl said.

A second McColl Term Professorship was made possible in 2005 thanks to support from Bill (BSBA '55) and Sara McCoy and Duncan Smith (MSLS '80).

The McColl Professorship was established in 1994 to recognize faculty who have made notable contributions to research, teaching and service to SILS. It provides a salary supplement and funds for research and travel for a two-year term.

"SILS also taught me how to think. I don't see issues as isolated instances. I automatically troubleshoot with a broad understanding of how issues connect to other issues across the organization."
-Clay Collin (BSIS'13)