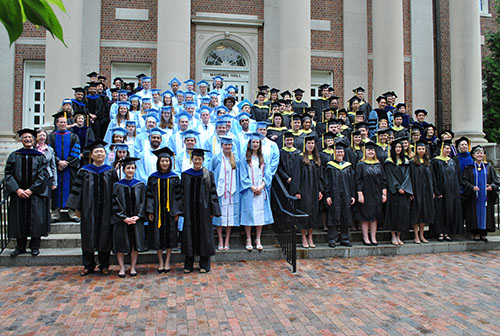 The event also included the presentation of the 2015 Deborah Barreau Award for Teaching Excellence to SILS assistant professor Mohammad Hossein Jarrahi and the 2015 Distinguished Alumni Award to Tim Bucknall (MSLS ’89). 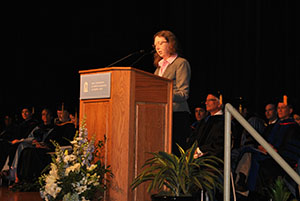 “You are in the midst of the most exciting time ever in the field of information and library science,” Dumais told the graduates. “Opportunities are innumerable in front of you. As you pursue these opportunities, I want to share three principles that I found very useful in my career. Be purposeful in your choice of problems, and be passionate and persistent in pursing them.”

Three graduates, Kai Ewing, Morgan McKeehan, and Alexander Poole, were recognized for earning Diversity Advocate Certificates. SILS associate professor Claudia Gollop presented the certificates, which are awarded to students who have completed required training and who have worked to make SILS, the University, and the field of information and library science a more diverse-friendly learning environment.

SILS professor Helen Tibbo announced the two recipients of the Dean’s Achievement Award for the highest quality masters’ papers submitted during the prior academic year. The 2015 winners were Aaron Steven Kirschenfeld for his paper “Yellow Fever: Describing Negative Legal Precedent in Citators,” and Rachel Danielle Walton for her paper “Looking for Answers: A Usability Study of Online Finding Aid Navigation.” 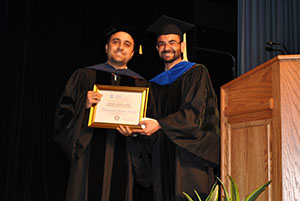 SILS assistant professor Jaime Arguello, who received the 2014 Deborah Barreau Award for Teaching Excellence, announced Mohammad Hossein Jarrahi as the 2015 recipient. First presented in 1997, the teaching excellence award was renamed in 2012 to honor Dr. Deborah Barreau, a two-time recipient of the award.

Jarrahi was one of eight SILS faculty members nominated for the award by staff, faculty, and students. In his introduction of Jarrahi, Arguello quoted some of the nomination submissions, which described Jarrahi as someone who “develops a relationship with each person in the classroom, adapts to the needs of students and the changing job market, is always up-to-date on the latest news and developments in information science, and keeps the class grounded through an emphasis in application.” 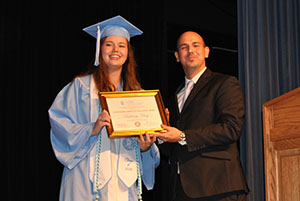 William Cross (MSLS ’11), immediate past president of the SILS Alumni Association (SILSAA), congratulated the graduates and welcomed them as the newest members of SILSAA. He then announced the two recipients of the Outstanding Service to the School Award. SILS faculty nominated BSIS graduate Brittney L. King, who had served as president of the student organization ISSUE (Information Science Student Undergraduates Empowered) and significantly helped to expand the group’s influence and visibility throughout SILS and across campus. 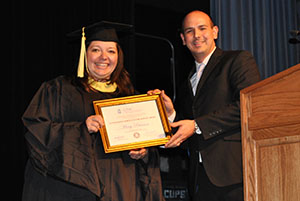 The second nominee, Mary Elizabeth Peterson (BSIS ’13, MSIS ’15), was cited for her work with the SILS IT Lab and for organizing a group of SILS students to conduct a usability analysis of the UNC Academic Advising program website.

Cross also recognized Tim Bucknall as the 2015 Distinguished Alumnus. Among other accomplishments, Bucknall founded the Carolina Consortium to provide access to library resources for the University of North Carolina system and created Journal Finder, the first open source link resolver.

Prior to the recognition of the graduates, Dean Marchionini announced the presentation of the Edward G. Holley for the Good of the Order Award to SILS executive assistant Susan Sylvester. The award is occasionally given to a SILS employee who has gone above and beyond the call of duty to make the school better and more effective. Dean Marchionini commended Sylvester for taking on the responsibilities of the communications director while the position was vacant for several months, and for her many other contributions that help make SILS such a friendly and productive place.

The ceremony came to a close with Dean Marchionini instructing graduates to turn their tassels. A reception was held in the lobby immediately following the ceremony. Click here for a pdf of the commencement program. Visit the SILS flickr album for more photos.