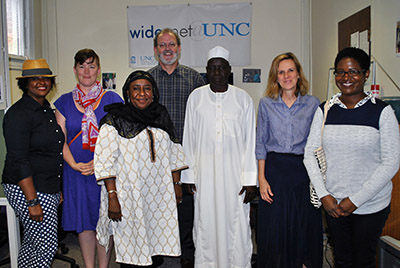 The WiderNet Project and WiderNet@UNC welcomed Col. Muktar Mohammed Bunza and Ms. Maimuna Izah of the Nigerian Defense Academy (NDA) to UNC-Chapel Hill and the UNC School of Information and Library Science (SILS) in late August. The NDA has partnered with the WiderNet Project, a non-profit founded and directed by SILS Associate Professor Cliff Missen, to install Widernet’s eGranary Digital Library on NDA’s campus and create a specialized portal of resources for their students.

Missen visited Kaduna, Nigeria, in June to complete the first installation and initial round of training at NDA. Bunza, NDA College Librarian, and Izah, NDA Academy Librarian, traveled to the U.S. to get additional training, learn more about library systems here, and share their experiences and perspectives with UNC faculty and students.

Bunza and Izah addressed students taking Missen’s course “Going the Last Mile: Information Access for Underserved Populations,” and conducted a SILS CRADLE Seminar titled, “Evaluating the Use of Academy Library by Cadets and Post Graduate Students in Nigerian Defence Academy, Kaduna, Nigeria.” During the seminar, Bunza and Izah shared the methods and results of a study examining why some NDA cadets do not frequently utilize the library. Among other findings, the study revealed that cadets struggled to fit library visits into their tight schedules and that junior cadets were worried about intimidation by seniors. Bunza and Izah discussed ways they are working with commanders to address these issues.

In addition to the time spent in the SILS classrooms and WiderNet labs in Manning Hall, Bunza and Izah toured the libraries at UNC-Chapel Hill and North Carolina State University.

“The facilities were really fantastic,” Bunza said. “We observed a lot of student-centered library services that we’re hoping we can adopt. We have been saying that the students at these universities have no reason to fail because the learning environments are so conducive to success.”