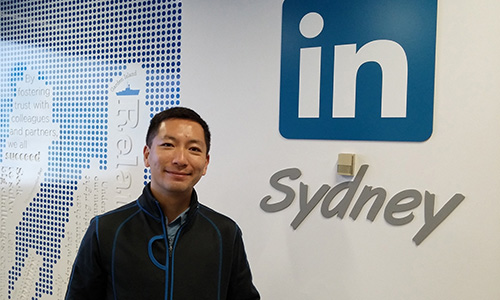 While over 380 million professionals are using LinkedIn to forge connections and advance their careers, SILS alumnus Xin Fu and his team are using big data to identify ways the site can become an even more valuable resource.

As Director of Data Science at LinkedIn, Fu leads data analysis efforts focused on the growth and engagement of the company, from attracting members and encouraging them to optimize their profiles, to connecting them with other members, relevant content, and new job opportunities. “My team is at the center of all these,” Fu said. “We partner closely with the product group and use data to drive the entire life cycle.”

Since earning his PhD and a concurrent M.S. in statistics from UNC, Fu has worked for some of the most recognizable names in the tech industry, starting with Google and then progressing to Microsoft before joining LinkedIn in 2012. Each position has given him the opportunity to examine human-computer interaction from a new angle, building on the passion that initially brought him to Chapel Hill.

Fu grew up in China and completed his undergraduate and master’s degrees there. He targeted SILS for his doctoral studies based on its top national ranking, and said the School definitely lived up to its reputation once he arrived.

Among his many positive experiences, Fu recalled conducting research under the guidance of Professor Diane Kelly and taking an influential user-centered design course with Professor Barbara Wildemuth. “That gave me a perspective that is still very valuable, reminding me all the time to think about the users and really try to see the world through their eyes,” he said. “That’s been super important for my career.”

Fu said the person who had the greatest impact was his advisor, SILS Dean and Professor Gary Marchionini. “I learned a lot, not just through the dissertation process, but also through other interactions,” Fu said. “He was kind enough to invite many international students to his house during Thanksgiving. He took us to conferences. And just observing how well he worked with grad students and other faculty made a tremendous impression. He was my role model.”

Fu settled on his dissertation topic, “Evaluating Sources of Implicit Feedback for Web Search,” after many discussions with Marchionini and a 12-week internship with Google in California at the end of his third year. After graduation, Fu returned to Google as a quantitative researcher embedded with the Google Maps team. “I focused on understanding user experiences from a large sample perspective, examining logs to determine what people were doing on Google Maps and then trying to identify opportunities to make it better,” he said.

At Microsoft, Fu joined the Bing data mining team. Rather than focusing strictly on analysis, he played a role in the end-to-end data life cycle, including collection and reformatting, which gave him a valuable new perspective on the process.

Fu said he enjoys his current work with LinkedIn because he can see the positive impact it has on people. “I’m really driven by the company’s mission to connect the world’s professionals and make them more productive and successful,” he said. “We use big data to power the product, which is turn brings opportunities to our members. That fundamentally makes me happy and proud. The ability to make sense out of data gives us the power to change the world, little by little.”

Fu has authored over 50 refereed papers and journal articles in the areas of information organization and retrieval, Web search interface, and online user behavioral measurement. These days, his work schedule doesn’t allow him to publish as much as before, but he still enjoys applied research and sharing knowledge through talks and conference presentations, as well as serving as a reviewer for journals such as JASIS&T.

Though he has lived in California since completing his PhD, Fu maintains a close relationship with SILS and agreed to serve on the newly formed Information Trends Advisory Roundtable (ITAR), a group of professionals who will make recommendations to help SILS courses and curricula adapt to changing conditions in the information professions.

“My five years at SILS marked a turning point in my career, and I’m really grateful for the mentorship from Gary, Diane, and Barbara, and to all the people I worked with,” he said.

This article originally appeared in the Fall 2015 SILS newsletter (pdf).