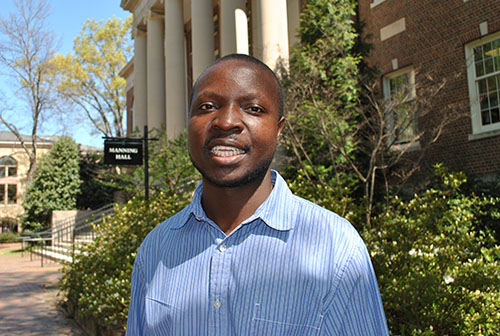 When the repercussions of a drought in his home country of Malawi forced him to drop out of school, William Kamkwamba turned to his local library to keep his mind engaged. There, he fed his love for engineering and electronics, and found inspiration to build a windmill that could power electrical appliances in his home. This project eventually attracted international media attention and opened a world of new educational opportunities.

Now Kamkwamba is working with the non-profit WiderNet Project and the WiderNet@UNC research lab at the UNC School of Information and Library Science (SILS) to create learning modules for the eGranary, a server that provides offline access to millions of videos, documents, and Web sites.

“William is helping WiderNet tackle the know-do gap,” said SILS Associate Professor and WiderNet Director Cliff Missen. “That is, inspiring young people to seek out new knowledge and then turn around and apply it to improve their lives and that of their community by accomplishing something practical.”

“Sometimes students are only interested in the knowledge they need to pass their exams,” said Kamkwamba. “That’s a good thing, but I want I want to see if I can encourage people to take one step further and use the information they’ve learned to make a meaningful project in their own community or to solve a problem people are facing.”

Kamkwamba recently visited Manning Hall to talk with undergraduate and graduate students taking the Database Systems course taught by Missen (watch videos of his visit at the end of this article or on SILS Vimeo page). Kamkwamba provided input on a class project to create a cloud based library service for underserved populations and discussed his personal journey.

After the story of his windmill circulated widely on the Internet, Kamkwamba was invited to deliver a talk at TEDGlobal 2007. His speech moved the audience, and several venture capitalists pledged to finance his secondary education. He enrolled in the African Bible College Christian Academy in Lilongwe, Malawi, then received a scholarship to attend the African Leadership Academy, and ultimately graduated from Dartmouth College in 2014.

Kamkwamba has shared his story in the book The Boy Who Harnessed the Wind, as well as through interviews with media outlets, including a 2009 appearance on The Daily Show. He was also the subject of the documentary film William and the Windmill, which won the Grand Jury Prize for Best Documentary Feature at the 2013 South by Southwest Film Festival.

When Kamkwamba began planning a move to Chapel Hill, going to work with the WiderNet Project seemed like a natural choice. He had used the WiderNet’s eGranary at his high school in Malawi and thought he could provide valuable insights on the information that students and others in Malawi would find most useful.

Kamkwamba still regularly speaks at conferences and other events, and continues to explore renewable energy sources, as well as agricultural, water, and sanitation improvements that have the potential to help his homeland.

“I’m very interested in finding ways to use the knowledge that I have gained through my education and interacting with people to solve some of the problems people are facing in Malawi,” he said.

Q & A with William Kamkwamba and SILS Database Systems Class from UNC SILS on Vimeo.