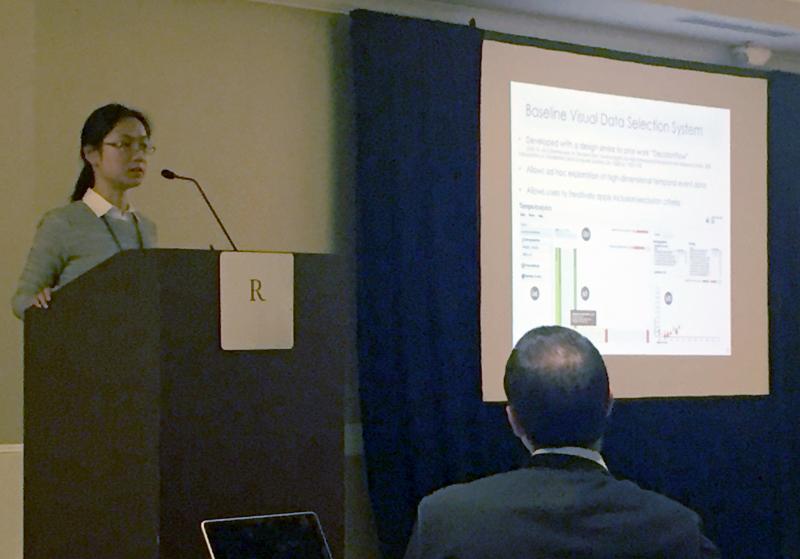 Associate Professor David Gotz and Master of Science in Information Science (MSIS) student Shun Sun received the Best Paper Award from the ACM Intelligent User Interfaces (IUI) Conference held March 7-10, 2016, in Sonoma, Calif. Sun had previously won a student travel grant from ACM IUI to attend the conference, where she presented the paper (pictured at right) and accepted the award on March 8.

ACM IUI is an annual meeting that serves as an international forum for reporting outstanding research and development on intelligent user interfaces. The conference brings together scholars from the Human-Computer Interaction (HCI) community and the Artificial Intelligence (AI) community, as well as those from related fields such as psychology, behavioral science, and cognitive science.

The winning paper, “Adaptive Contextualization: Combating Bias during High-Dimensional Visualization and Data Selection,” was co-authored by Gotz and Sun, both of the UNC-Chapel Hill School of Information and Library Science (SILS), and Nan Cao, Assistant Professor in the Department of Computer Science and Engineering at NYU Shanghai, China.

The paper proposes new methods for improving the quality of data analysis when using interactive data visualization.  The research is motivated by an often critical difference in dimensionality between real-world data (which can contain many thousands of variables) and visualization techniques (which usually show only a few dimensions of data at a time). This difference in dimensionality can put a user’s analysis at risk of large amounts selection bias.  Moreover, that bias often goes undetected by users because the impacted variables are often omitted from the visualization.

The paper describes Adaptive Contextualization (AC), a new intelligent visualization approach to address this challenge. The AC methods are being developed as part of Tempo, a visualization-based cohort selection system designed to support population health researchers who are exploring “Big Data” collections of electronic health data.

Watch the video below or click here to read more about the research.