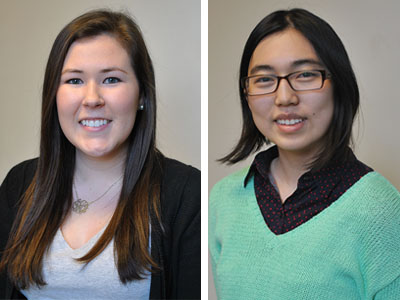 Jessica Head and Aileen Ma, two newly-admitted Bachelor of Science in Information Science (BSIS) students at the University of North Carolina at Chapel Hill School of Information and Library Science (SILS), have been selected to receive $1,000 scholarships for the spring semester. The merit-based scholarships are awarded in the spring and fall to two incoming BSIS students who have demonstrated high scholastic achievement and written outstanding essays.

Head, who is from Cary, N.C., said she chose to major in information science because it was “grounded in technology, but also has a very personal touch since we are connecting information, people, and technology.” She also likes the variety of career paths offered by the major. “I don’t feel like I’m ever boxed into one category.” After graduation, she hopes to work for a large technology or software company interpreting analytics and helping to design new systems.

Ma said she initially considered a journalism major but realized she was not as interested in reporting the news as she was in learning “how news was transmitted, how information was distributed to an audience, and how information was transformed during that process.” Ma, who is from Charlotte, N.C., heard about INLS 161 during a journalism workshop and decided give it a try. “I found through that class that the BSIS major would be a good fit for me.”

Both Head and Ma said that winning the scholarship increased their confidence that they had made the right choice with the BSIS program.

“It showed me that others in the department recognized my hard work and the potential that I have to grow in this field,” said Head. “It was amazing to feel the support of others in the SILS program who have all done such amazing things in their respective areas.”

“Receiving this scholarship gives me validation that I'm going the right direction with my academic career,” said Ma. “It gives me motivation to continue pursuing this field and explore what it has to offer.”

The BSIS program will be accepting applications for fall admission February 1-March 1, 2016. Click here to apply.