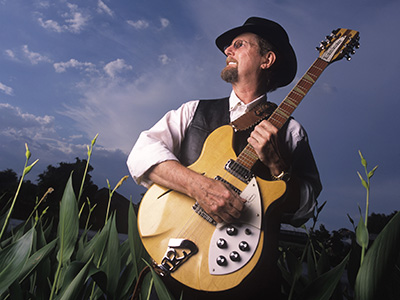 Twenty years ago, Rock and Roll Hall of Fame musician Roger McGuinn decided that on the first day of each month he would upload a recording of a folk song, create a page with lyrics, tablature, and a brief bit of information about each song, and share it all for free on the World Wide Web.

Through his dedication to the Folk Den, which found a home at ibiblio.org shortly after its launch, McGuinn has added archivist and curator to his already impressive list of credentials. In recognition of McGuinn’s work to establish and cultivate this valuable online resource, the University of North Carolina at Chapel Hill School of Information and Library Science (SILS) has named him the inaugural recipient of its Digital Preservation Under the Radar Award.

“We hope this award will help spotlight digital preservation pioneers who have made significant contributions in unique and unusual ways, as well as those who have taken non-traditional paths to become notable digital archivists,” said SILS Dean Gary Marchionini. “Roger McGuinn has created a rich online repository with the Folk Den and we are pleased to acknowledge his achievement in an official way.”

McGuinn will be presented the award prior to his lecture and performance on March 1 at the CHAT (Collaborations: Humanities, Arts, and Technology) Festival.

McGuinn is best known as the lead singer, guitarist, and founding member of The Byrds. He began his career as a teen with an education at the Old Town School of Folk Music. His association with Bob Gibson, Frank Hamilton, and others prepared him for an early professional life touring with the Limeliters, Chad Mitchell Trio, and Bobby Darin. Inspired by the folk movement and the new music of the British rock and roll invasion, McGuinn formed The Byrds, which collectively introduced folk-rock, raga rock, space rock, country rock, and a variety of electronic music innovations. He was inducted into the Rock and Roll Hall of Fame in 1991.

Before McGuinn began selecting, recording, and sharing music through the Folk Den in November 1995, very little folk music was legally available online and the quality and documentation of what could be found was usually poor, said Paul Jones, UNC clinical professor and director of ibiblio.org.

“The Folk Den, on the other hand, offers exquisite performances, the clearest possible provenance that history will allow, and simple accessible metadata,” Jones said. “It is a model for what a citizen archive should be: unique to itself, informed by passion, built by perseverance, and shared with love and an open heart.”