For some, working with new technologies can be an intimidating feat. For SILS Assistant Professor Maggie Melo and SILS graduate student researchers, their current research seeks to understand why this reaction happens in technological environments and how to reduce this apprehension.

In late summer 2022, Melo and student researchers from her Equity in the Making (EITM) Lab held workshops in Durham County Library’s Innovation Lab to teach mature adult audiences how to use makerspace technology.

The workshops are an effort to apply research findings from Melo’s Equity In The Making (EITM) Lab’s research study, which is currently underway and is using a virtual reality makerspace to identify thoughts and impressions of underrepresented communities as they approach and decide to use or not to use 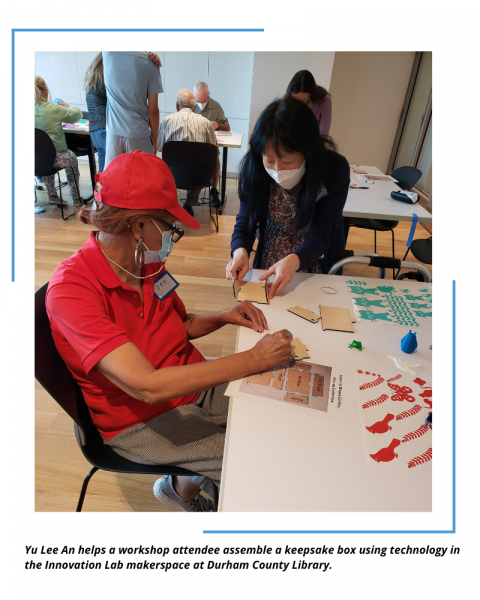 makerspaces. The project is funded by a $715k NSF grant awarded to Melo in 2020.  The overall goal of the research project is to identify ways that makerspaces can become more inclusive and equitable.

“One major goal of our grant project is to put research into action. So, thinking of ways that makerspaces can be inclusive,” Melo said. “We began to think about our surrounding community but also our connections – two SILS alum run the STEAM (science, technology, engineering, arts, and math) makerspace program at Durham County Library.”

While reaching out to the SILS alumni who work at Durham County Library, Melo developed an understanding of the Durham community’s science, technology, engineering, and math (STEM) programming needs, with specific attention to underserved populations.

“Usually, when we think of STEM programming, we think of kids and teaching them how to code or work with different technologies or robotics,” Melo said. “But for Durham County Library, their major underserved population was mature adults. So, we began to think about programming that could showcase their STEAM lab and our research.”

During the workshops, attendees were tasked with creating keepsake boxes which were put together using different materials that required the use of the various fabrication tools within the Innovation Lab. This provided workshop attendees with an understanding of how to use and apply the various technology in the lab through a hands-on approach while in a setting of their peers to reduce apprehension.

“There is an interest in technology, and there is no age limit. But there is also no age limit when it comes to intimidation of technology. So, some of the participants mentioned that they were happy that it was a class strictly for mature adults because makerspaces read as being used by kids or college-aged users,” Melo said. “Instead of opening the program to everyone, we wanted to make sure it was for an audience of mature adults so they feel they are among their peers and that they could take these creative risks without being judged or assessed.”

“We were meeting them at their level,” An said. “So, we weren’t introducing them to technologies that were overwhelming, but bringing them technology on a level that they could appreciate.”

An added that throughout the course of the workshops, attendees became more comfortable approaching and trying other tools in the lab.

“By the time we finished the workshop, the attendees wanted to learn more,” An said. “Once they could get over that initial fear, I think people were really excited about what they could do with these technologies.” 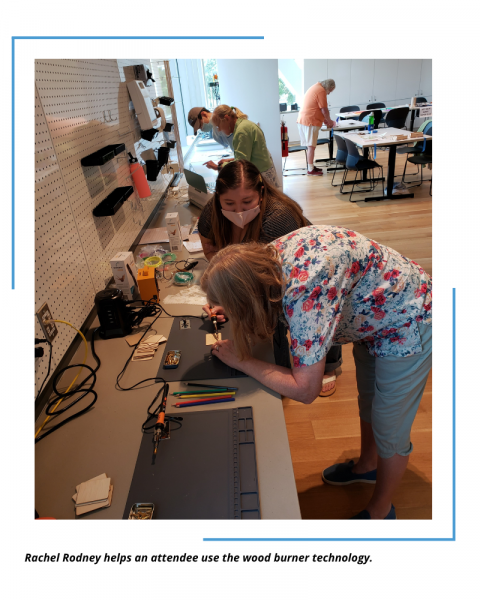 In the future, the EITM Lab also plans to bring makerspace technology into an assisted living community to hold a mobile workshop for attendees who are unable to travel, making the learning experience more accessible.

To learn more about the EITM project and lab, visit eitm.unc.edu.

About the Equity in the Making Lab Research

The focus of the Equity in the Making: Investigating Spatial Arrangements of Makerspaces and Their Impact on Diverse User Populations project is to learn more about how to foster equity and inclusion for underrepresented students within makerspaces.  Through the new VR makerspace, the lab will conduct a study to capture real-time reactions, thoughts, and impressions of underrepresented students entering a makerspace for the first time.

“What we are seeing is that usually students from these underrepresented communities will walk up to a makerspace and turn away at the threshold,” Melo said. “The virtual reality makerspace will allow us to collect real-time data that captures students’ reactions, their 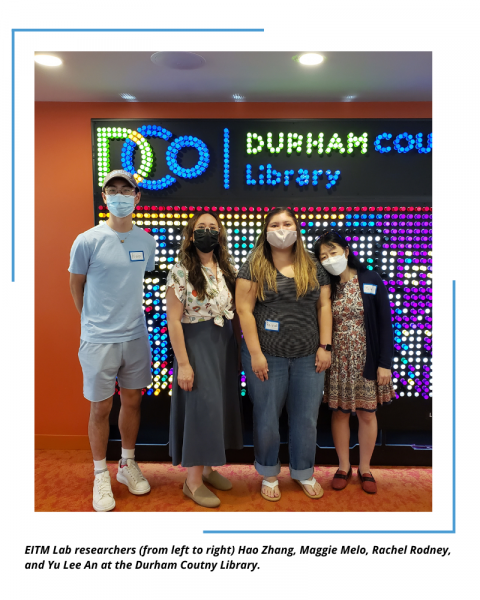 feelings, and their thoughts at the threshold. There are these gut reactions that students are making to determine whether they enter the space or not.”

Those “gut reactions” are exactly what the EITM team plans to document within their study with the intention that these instant responses can provide insight as to how and why unrepresented students decide to enter makerspaces or not. In the larger conversation on STEM equity and representation, the research project will hope to pinpoint ways to adapt makerspaces to be more accessible and inclusive for underrepresented students.

The research project is funded for five years.