Established in 1981, the Distinguished Alumni Award recognizes UNC School of Information and Library Science (SILS) alumni who have demonstrated outstanding professional library or information science achievements at national, state, or local levels, or who have provided exceptional service to SILS or its Alumni Association. Recipients are selected by the SILS Alumni Association Board each year. 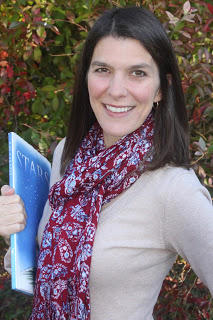 Kathryn Cole is the School Librarian and Media Specialist at Northside Elementary School in Chapel Hill, N.C. Her efforts to make the library a more inclusive space and reach students during the summer months earned her an “I Love My Librarian Award” from the American Library Association in 2016.

Cole helped establish Northside’s library when the school opened in 2013. When she learned that most of the underserved students enrolled in the school were not participating in the public library’s summer reading program, she won grant funding to create a new joint program.

She opened the school library over the summer break to help serve families that lived within walking distance of the school. She made the reading program more attractive by featuring local performers, including storytellers and hip-hop dancers, hosting movie days with popcorn, and making the MakerSpace and Wii gaming systems available.

Throughout the year, Cole strives to make the library a welcoming space for all students through programming and materials that reflect and represent a wide range of cultures and experiences. “She explicitly works to be anti-racist, anti-queerphobic, anti-ableist and to provide ‘windows and mirrors’ for all of her students but especially for her non-white, non-male, non-cisgendered, non-abled, non-heterosexual students,” wrote one of the recent SILS graduates who nominated Cole for the distinguished alumni award.

Cole has also been active in local, state, and national school library conversations, presenting her work at conferences including the North Carolina School Library Media Association Annual Conference and the National Council of Teachers of English Annual Conference.

She has stayed closely connected to the school librarianship program at SILS, collaborating with Professor Sandra Hughes-Hassell for project-based learning opportunities, as well as mentoring SILS students during field experiences. 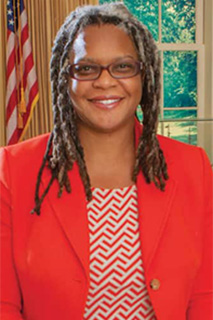 Meredith Evans is Director of the Jimmy Carter Presidential Library and Museum in Atlanta and served as President of the Society of American Archivists (SAA) from 2018-2020.

Throughout her career, Evans has worked to preserve and expand access to collections of national importance. In her first professional position as an archivist, Curator of Printed Materials for the Atlanta University Center, she collaborated on a grant to digitize materials in the Morehouse College Martin Luther King Jr. Collection.

As Director of the Special Collections Research Center at George Washington University, she led the acquisition of more than 80 years of National Education Association records and more than a century of records for the International Brotherhood of Teamsters.

At UNC-Charlotte’s J. Murrey Atkins Library, she helped launch an LGBTQ collection with ties to the local community and was instrumental in acquiring the Congressional papers of Sue Myrick, who served as a U.S. Representative from 1995 to 2013.

During her time as Associate University Librarian at Washington University in St. Louis, she helped expand the university’s Documenting Ferguson digital repository, which includes community members’ submissions of video and audio files from the aftermath of the death of Michael Brown in August 2014.

Evans joined the Carter Presidential Library and Museum in 2015. Administered by the National Archives and Records Administration, the library maintains the records and artifacts of former President Jimmy Carter and his White House administration (1977-1981) along with materials related to his post-presidency and family. Evans and her staff coordinate exhibits and programming for visitors, as well as access for researchers from around the world.

In 2017, Evans worked with SILS to host a special alumni event at the library. She has been a member of the SILS Board of Visitors since 2017 and became Chair of the board in 2020.